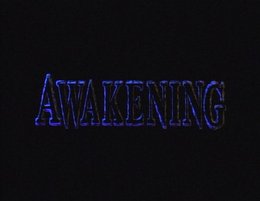 "Awakening: Part One" is the first televised episode of the series Gargoyles, and the first episode of Season 1. It originally aired on October 24, 1994.

The gargoyles of the Wyvern Clan are introduced while repulsing an attack during a battle between the Vikings and Castle Wyvern. However, thanks to the planning of the Viking leader Hakon and a traitor within the Castle , Wyvern is sacked the next day, free of Gargoyle intervention, and Hakon slaughters almost all of the gargoyle clan while they are asleep. Goliath and the gargoyle who will be known as Hudson return that night after being decoyed away from the castle, and find the remains of their clan, including what Goliath believes to be his "Angel of the Night"...

In Manhattan, a battle appears to be taking place atop the Eyrie Building while debris falls down to the street below. Detective Elisa Maza arrives on the scene, and wonders at the strange claw marks in a piece of fallen stone.

The gargoyles are treated with disdain by most of the denizens of the castle, including Princess Katharine and the Magus. The Captain, who is most likely the only human friend of the gargoyles, has Goliath and his mate appear before the Princess for recognition of their bravery. Instead the princess calls them "beasts" and demotes the Captain, a move which motivates the Captain to betray the people of Wyvern.

The Captain and Demona try to convince Goliath to take the whole clan with him to scare off the Vikings from returning. Goliath instead decides to take just his mentor. He realizes too late that he has been tricked at the turning of the dawn. The captain goes ahead with his plan for the humans to be captured, but is unable to prevent Hakon from destroying the clan.

Brooklyn, Lexington,and Bronx act savagely towards a group of humans after Mary insults them. Goliath sends them and Broadway down to the rookery as punishment, which will end up saving their lives.

(In order of appearance)

"I can see why." - Broadway and Lexington

"Then perhaps we'd better live up to the name." - Brooklyn and Lexington

"They're not my kind." - Hakon and the Captain

This episode begins with a "cold opening", that is without an opening credits sequence. This was done so that the opening sequence would not give away important plot twists such as the Wyvern Massacre. The episode begins with the title screen (the word "Awakening" on a black background) then goes straight into the action with a short teaser set in the modern day. The word "Gargoyles" appears on-screen at the transition to medieval times (immediately after Elisa's question of "What could be strong enough to leave claw marks in solid stone?"). The series' familiar credits sequence is included at the end of the episode.

Castle Wyvern, while fictional, was modelled after the real castle of Tintagel in Cornwall, which, according to legend, was the place of King Arthur's conception. (Intriguingly, in the never-made Gargoyles/Team Atlantis crossover story entitled "The Last", Greg Weisman had the Atlantean word for "gargoyle" be "gorlois"; Gorlois was also the name of the Duke of Cornwall in the lifetime of Uther Pendragon, Arthur's father, whose likeness Uther took on while begetting Arthur upon Gorlois' wife Igraine at Tintagel.)

Sharp-eyed viewers will note several dogs roaming through the great hall during the banquet scene. While true to medieval custom, it also subtly displays Princess Katharine's hypocrisy, when she objects to Goliath and Demona's presence with the words "To allow beasts in the dining hall!" Originally it was intended to immediately follow up Katharine's words with a scene in which one of the dogs proceeded to help himself to food from someone's plate, to make this all the clearer, but unfortunately the scene was not animated well-enough to appear in the finished product.

Another deleted scene (though this one was cut out for time constraints) had the young gargoyle who would later name himself Lexington examining one of the Vikings' catapults, as an indication of his fascination with all things mechanical. [1]

The Captain of the Guard is never given a personal name in the series. Since the gargoyles (except for Goliath) had no personal names in the 10th century, and the Captain identified with them far more than with his fellow humans (to the point where, when Hakon asks him "Why betray your own kind?", the Captain bitterly replies, "They're not my kind."), this is very fitting and appropriate. However, according to Greg Weisman, the Captain's real name was Robbie. [2]

Officer Morgan, introduced in the "modern-day teaser" sequence at the beginning of this episode, was the first of many familiar recurring characters to appear in the background of the Gargoyles' New York. "Morgan" is both his first name and his last name (a concept inspired by the name of a highschool classmate of Greg Weisman's, Morgan Lord Morgan III). In early versions of Gargoyles as it went through Breakdowns, "Morgan" was an early name of Elisa's, reused for an incidental character after her final name was decided upon. (Many of Elisa's "first draft" surnames, such as Chavez, Bluestone, and Reed, would also be used for other characters as the series progressed; clearly, the Gargoyles production staff shared Xanatos' fondness for "recycling" of the sort shown in "Cloud Fathers"!)