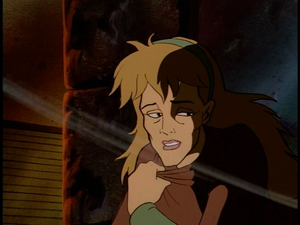 Maggie Reed, before her mutation

Maggie the Cat, originally called Maggie Reed, was a woman from Ohio who became one of the victims of Xanatos and Sevarius' Mutate Project, being turned into a mutate. She is now a member of the Labyrinth Clan, and the lover of Talon.

Maggie Reed left Ohio for New York with a bus ticket and twenty-two hundred dollars, hoping to become a star, but found no acting jobs and went through her money much more quickly than she had anticipated. [2][3] Before long, she found herself living out on the street, where Doctor Sevarius found her and lured her into his service ostensibly as his assistant at Gen-U-Tech, but in reality to make her into a mutate, knowing no one would miss a homeless young woman.

After being injected with a mutagenic formula, Maggie escaped Gen-U-Tech (being actually prompted to do so by Sevarius, as part of the scheme to mutate Derek), and encountered Brooklyn and Broadway, who attempted, unsuccessfully, to rescue her from the Gen-U-Tech security team; in the process, Brooklyn developed a crush on Maggie that she, needless to say, did not return. Goliath, Lexington, and Brooklyn promptly broke her out of Gen-U-Tech, in the process "foiling" Sevarius' cure of Derek, and took her back with them to the clock tower; however, she was afraid of the gargoyles, and fled as soon as they turned to stone. She went to Castle Wyvern to seek shelter with Xanatos, alongside the other mutates, but after their first clash with the gargoyles there, fled with the others (rejecting Brooklyn's overtures in the process). ("Metamorphosis")

Like the other mutates, however, Maggie returned to work for Xanatos, hoping that he could cure them. While Talon was more interested in gaining revenge on Goliath and Sevarius, whom he blamed for his condition, and Fang, who liked being a mutate, Maggie simply longed to become human again. When she and the other mutates located Sevarius with Goliath in the Labyrinth, she was more than ready to take Sevarius' Fake Mutate Antidotes|cure]], even if it was really poison, but Talon persuaded her against it, in the process revealing his feelings for her. ("The Cage")

Maggie then settled down with the other Mutates in the Labyrinth, in the process growing closer to Talon.

When Fang seized control of the Labyrinth in his coup, he temporarily captured her, but she later on escaped and obtained the help of Hudson and the Trio. They returned to the Labyrinth and Maggie was able to trick Fang (using her acting skills) and helped retake the Labyrinth. ("Kingdom")

Maggie, alongside Talon (who she calls Derek) and Claw, welcomed many outsiders into the safety of the Labyrinth including homeless humans, the clones and eventually other mutates. She was injured during Thailog's attack on the Labyrinth on Halloween, 1996, but soon recovered. Around this time, Maggie also became pregnant. ("Masque", "The Rock")

Maggie and Talon will eventually get married. [4]

Maggie's mutate form incorporates genes from a lion, a bat and an electric eel alongside her natural human DNA. Originally, her appearance was very shaggy and slightly grotesque. However, her form evidently fully developed into a much sleeker and more attractive leonine visage.

She is the gentlest of the mutates, and despite her initial fear of the gargoyles, soon came to understand that they were not evil monsters and wanted to help her. While having no romantic feelings for Brooklyn, despite his infatuation for her, she soon came to fall in love with Talon (no doubt thanks in part to his concern for her, particularly when he stopped her from drinking Sevarius' "antidote").

The name "Maggie the Cat" is a reference to a character in the play Cat on a Hot Tin Roof by Tennessee Williams.