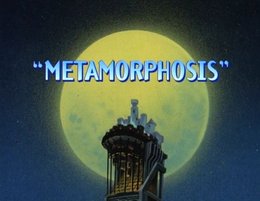 "Metamorphosis" is the fifteenth televised episode of the series Gargoyles, and the second episode of Season 2. It originally aired on September 5, 1995.

Xanatos and Anton Sevarius work together in a dastardly plot to create a group of gargoyle-like genetically altered humans for Xanatos to keep at his castle. Derek Maza goes with Xanatos to Sevarius' Gen-U-Tech lab to find out why the scientist needs armed mercenaries for his current project with Xanatos. Sevarius reveals the mutates: Fang, Claw, and Maggie, then shoots Derek with a dart containing the mutagenic formula while the young man was protecting his boss. Xanatos acts appalled, and threatens to turn Sevarius in despite his own involvement in the project, and orders the doctor to create an antidote. The serum is destroyed when Goliath, Brooklyn, and Lexington raid the lab to liberate Maggie; and Sevarius appears to perish when Goliath kicks him into the electric eel tank. Sevarius later comes to see Xanatos, revealing their plot to turn Derek into the leader of the mutates.

Elisa is still rightfully worried about Derek working for Xanatos, but Derek promises to contact her if there is any trouble. After Derek is shot with the formula, Elisa comes to the lab to investigate Maggie's kidnapping. Xanatos threatens Sevarius that he will tell the police what happened if the scientist doesn't create an antidote, and he tells Derek that he will have Elisa brought in if he wants, knowing that Derek will refuse the offer, being too proud and stubborn to ask for help from his sister. Elisa is turned away, then returns after the gargoyles' raid and finds out that Xanatos owns Gen-U-Tech. She later goes to the Eyrie Building and effectively ends a fight between the mutates and gargoyles. She confronts the creature, "Talon", and is shocked when she realizes he's Derek when he automatically performs a ritual they did as kids. Elisa blames Xanatos, but Talon is still in denial, and accidentally shocks her with a blast of electricity. Ashamed, Talon leaves the building temporarily with the other mutates, and Elisa threatens Xanatos before going to the clock tower to cry.

Maggie Reed is homeless on the streets of New York when Sevarius offers her a job. She is turned into a mutate, and later escapes from the lab when Brooklyn and Broadway spot her in an alley. Brooklyn is immediately smitten with her, deluding himself into thinking that she feels the same way and wants his help. Broadway sees that she is frightened of them, but helps Brooklyn in an attempt to save her from a group of Gen-U-Tech guards. Brooklyn is shot with a tranquilizer dart, and Broadway leaves with him while Maggie is brought back to the lab. Brooklyn is determined to save her, and the next night, he, Goliath, and Lexington raid the lab to do so, where they unknowingly ruin Derek's chance for a cure. Maggie is taken back to the clock tower, and the gargoyles try to reassure her of their good intentions, but she leaves for the Eyrie Building to be with the other mutates. The gargoyles go there the next night, and Maggie shoots Brooklyn with an electric blast while accusing him of wanting her to stay a monster. After the mutates leave, Brooklyn realizes that has been deluding himself all along, and that Maggie never held any interest in him.

Xanatos asks Owen to find the "best geneticist on the planet" after Sevarius' supposed death, but Owen presents Sevarius to Xanatos alive and well. Everything was staged so that Derek would become a mutate, and they had him believe that Xanatos was free from blame and the gargoyles caused Derek to lose his chance for a cure. Xanatos and Sevarius had the mutates escape on purpose so that the gargoyles would spot one eventually, rightly predicting they would go to the lab to rescue him or her while Derek is being administered a supposed cure, then have Sevarius fake his death. Xanatos is confident that the mutates will return to him since they think he will provide them with a cure.

"You're right, we'll both go down for this. But I've been in prison before, have you? The police, the press, the public... they'll crucify you; and if they don't, I will." - Sevarius and Xanatos

"We're not monsters either. Don't be afraid." - Maggie and Brooklyn

"Send her up. We have to stop this senseless violence." - Owen and Xanatos

"Frankly, Sevarius, I thought you overplayed the part." - Sevarius and Xanatos

Dr. Anton Sevarius and the mutates are first introduced in this episode. It's also the last time we see Derek Maza as a human, and Maggie Reed appears briefly at the beginning of the episode as a human. Sevarius next appears in "Double Jeopardy", where he's essential in creating the evil clone, Thailog. The mutates next appear in "The Cage", though Talon has a brief non-speaking appearance in "Upgrade".

Broadway initially mistakes Maggie for Demona when he first sights her and Brooklyn reacts strongly (another allusion to his feud with her that began in "Temptation").

Bruno and his team from "Awakening Part Two" serve as Sevarius' security at Gen-U-Tech.

Broadway describes Gen-U-Tech's logo as a "symbol"; since the logo consists of the actual words "Gen-U-Tech" (if written in a stylized fashion), it is tempting to wonder if this is a subtle reference to his illiteracy that would play such an important role in "A Lighthouse in the Sea of Time".

Xanatos and Sevarius, during their discussion of Sevarius' plans to "create" gargoyles for Xanatos in front of Derek, mention that they had been unable to clone one; it is revealed later in "Double Jeopardy" that they were lying about that and Thailog was already in the works.

In the early plans for the series, the mutated victim was originally to be a scientist in Xanatos' employment who was (thanks to some behind-the-scenes manipulation by Xanatos) transformed into a feline mutate by one of his own experiments, and afterwards went by the name of Catscan (so called because his eyes could shoot out blasts of radiation). However, after the introduction of Elisa's family in "Deadly Force", Greg Weisman realized that it would be even more effective to make the mutated figure Elisa's brother (thus anchoring him more strongly in the main cast), and revised his plans accordingly, changing Catscan into Derek/Talon, and splitting his "scientist" side off to become the separate (and far less ethical) figure of Sevarius.

In his ramble for "Metamorphosis", Greg Weisman wrote that he "was never too fond" of the Zen Master joke that Elisa told the Hot Dog Vendor, but coincidentally enough he would create a "Zen Master character" for what would eventually be adapted for "Reunion" the sixth issue from the SLG comic book series).

To save money on voice actors, Fang was voiced by Jonathan Frakes in this episode.

When the episode ran a little short, the production team added in a brief scene at the beginning, showing the gargoyles awakening: a beautifully atmospheric moment, with small stones raining down from the gargoyles' perch (pieces of their stone skin) on top of a bewildered bystander, and pigeons hurriedly flying away from the clock tower.

Frank Paur was the director and Michael Reaves was one of the writers of a Batman: The Animated Series episode "Tyger, Tyger", where Selina Kyle (Catwoman) was mutated into a real cat-woman by a mad scientist. Batman also battles a cat-man creature created by the mad scientist. [1]

The title of this episode may come from the novella, The Metamorphosis, by Franz Kafka. The main character, Gregor Samsa, awakens to find that he has changed into an insect. [2] Kafka was referenced in the previous episode, "Leader of the Pack".