From GargWiki
(Redirected from Sevarius)
Jump to: navigation, search 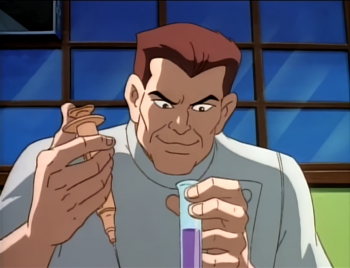 Dr. Anton Sevarius is a noted geneticist, employed by the various clients to assist them in matters of genetic engineering.

Sevarius was originally in the employ of Halcyon Renard at Cyberbiotics (perhaps working in its underground research facility), but Xanatos lured him into his service. ("Outfoxed") [1] (Considering the fact that Xanatos was far more ready to tolerate, and even request, the sort of amoral experiments that Sevarius busies himself with than Renard would have been, it is doubtful that this was a particularly difficult achievement.) He became the head of Gen-U-Tech Systems, the genetic engineering division of Xanatos Enterprises.

Xanatos put Sevarius to work on two gargoyle-related projects. The first of these was to mutate some humans into gargoyle-like creatures, for Xanatos to use as henchmen in the event that he was unable to recruit Goliath and his clan to his cause. ("Metamorphosis") Sevarius successfully mutated Derek Maza, Maggie Reed, Fred Sykes and the human now known as Claw, but they afterwards decided to go their own way and not serve Xanatos. Goliath temporarily kidnapped Sevarius in the hopes of forcing him to provide a cure for the Mutates, but released him after Elisa brought him to his senses. ("The Cage")

The second project was to clone Goliath. Sevarius succeeded at this, creating Thailog. However, Thailog proceeded to trick Sevarius into "kidnapping" him and hold him for ransom from Xanatos at the Black Rock Point oil rig, then tried to kill Xanatos, Sevarius, and Goliath after making off with the ransom money. However, Elisa managed to rescue Thailog's three "fathers", including Sevarius. ("Double Jeopardy")

It was revealed by Dingo that Sevarius was the one who turned Wolf into a mutate. ("Estranged") Although hitherto, he has not been shown to be an expert in cybernetics, Sevarius may have assisted in Jackal and Hyena's upgrade. [2]

Later on, Sevarius went to Loch Ness to capture the Loch Ness Monsters and use their genes as a basis for more breeding experiments (presumably on Xanatos' behest, since the Xanatos Goon Squad accompanied him there). During that time, he encountered Angela and discovered that she was really Goliath and Demona's biological daughter, revealing this information to her. He also took a sample of her DNA, which he later used to create a gargate mutagen. [3] Goliath and his companions rescued Nessie, the Loch Ness Monster from Sevarius. While most of the Xanatos Goon Squad drowned when the Loch Ness monsters attacked their submarine, Sevarius escaped and eventually returned to New York. ("Monsters", "Louse")

There, he entered the employ of Demona and Thailog at Nightstone Unlimited, and created the clones of Hudson and the trio for them. ("The Reckoning") (He also secretly created Delilah at Thailog's request, without informing Demona.) During this time, he informed Demona that Angela was her biological daughter. [4][5]

After the failure of Demona and Thailog's attempt to destroy the clan, Sevarius remained a Nightstone Unlimited employee, and developed the CV-1000 Carrier Virus for Demona (presumably without knowing what purpose she intended to use it for). ("Hunter's Moon Part Two")

On Halloween 1996, Sevarius was seen working at Nightstone, under the employ of Thailog. Furthermore, the corrupt clone recently collected new genetic samples of the entire Manhattan Clan, including Elisa, for the geneticist's use for any upcoming projects. ("Bash") According to Robyn Canmore, he currently works on a freelance basis, his employers include Xanatos Enterprises, Nightstone Unlimited, and a company called Bushido Concepts. Sevarius was also responsible for the Tazmanian Tiger being in possession of two thylacines, a species that had gone extinct. ("Estranged")

Even more recently, Sevarius infiltrated the Labyrinth in the guise of a homeless man named Fred, in order to gain access to Fang's cell. (His choice of alias was another example of his sardonic humor; "Fred" was Fang's original name.) ("The Lost") Freeing Fang, Sevarius abducted several human residents of the Labyrinth and mutated them into various forms. He alleged that a client was interested in obtaining an army of armored mutates and the newest mutate batch was early testing. His next plot was to release the CV-1997 Carrier Virus upon the humans gathered at Times Square for the New Years celebration being held there, causing them to become mutates as well. His plan was foiled by the actions of the Redemption Squad, but Sevarius was able to escape. ("Louse") 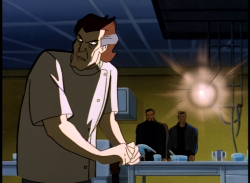 Sevarius hamming it up with a fake limp, hair-dye, and makeup. 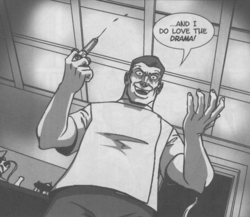 Sevarius is noted not only for his considerable expertise in genetic matters and utter amorality and unscrupulousness, but also for being an utter ham. He eagerly takes on the role of the stereotypical mad scientist, reveling in its clichés with considerable gusto, often prizing dramatic acts alongside scientific or monetary gain. He has twice shown talent in the art of disguise.

While his current citizenship is unknown, Sevarius is either American or British. [6]

Sevarius owns a gray monogrammed, albeit misspelled, briefcase where he keeps his notes. He also has a car.

When the Clones contracted a strange disease, the Manhattan Clan brought them to Sevarius and insisted that he cure them. He collected fresh DNA samples from the Manhattan Clan, supposedly for use in a serum, but used the samples to bring to life a giant gargoyle he dubbed "Little Anton." Sevarius has Little Anton protect him from the angered Manhattan Clan and a seriously ill Thailog. But when Thailog succumbs to the illness, a grieving Goliath injects Little Anton with a vial of fast-acting disease, which quickly turns him to stone. Because Sevarius never actually developed an antidote, he is unable to save his "son." Sevarius seems to have oddly paternal feelings towards Little Anton, far different than his dismissive attitude towards the Clones. He appears to be genuinely grief stricken when Little Anton is turned to stone permanently, continuing to reassure the gargoyle even after his creation can no longer hear him. ("Genesis Undone")

For reasons unexplained, Sevarius is later arrested. ("Seeing Isn't Believing") Sevarius' middle name was revealed to be Bartholomew, though this has never been mentioned outside of The Goliath Chronicles. Greg Weisman did mention that while he doesn't consider "Bartholomew" to be canon, he doesn't object to it, either. [7]

Unlike the canon version, this Sevarius has grown tired of his role and the constant kidnapping attempts and threats on his life that come with it, his only remaining desire is to be left alone. By contrast, the canon version of Sevarius still revels in his work and has expanded his operation, working not only for Xanatos and Thailog but anyone willing to pay.

Sevarius' name is similar to that of Severino Antinori, a controversial real-world embryologist who has a public interest in human cloning. The staff of Gargoyles were not aware of Antinori during the series' production (and the series predates his work on human cloning), so the similarity in the two names is purely coincidental. [8][9][10]

Sevarius was named by Michael Reaves. Greg Weisman initially did not like the name, but deferred to Reaves' judgement at the time and later decided that the name was perfect for the character. [11]

Brent Spiner was among those considered for Sevarius. [12] He was later cast as Puck.