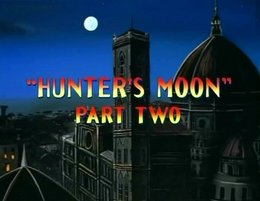 "Hunter's Moon" Part Two is the sixty-fourth televised episode of the series Gargoyles, and the fifty-first episode of Season 2. It originally aired on May 14, 1996.

Goliath's war with the Hunters continues in earnest after Angela nearly dies before sunrise, though she is saved by Elisa in time with CPR. When the gargoyles wake up the following night, they go out in pairs to search for the Hunters. Goliath goes to pick up Elisa, only to witness her kissing Jason Canmore from her window. More upset than ever, Goliath spots the Hunters' Airship, and enters with reckless abandon after convening with Brooklyn and Lexington. The three of them run into Demona, who is there to fight the Hunters herself, and all four gargoyles are captured and put in a holding cell by Jon and Robyn Canmore. Goliath and Demona form a truce, and the gargoyles escape after Goliath and Demona knock the two Hunters out, thinking they killed them. The three Hunters decide the best course of action would be to blow up the clocktower at night with a surgical strike, and do so after being led there by a tracer that Robyn had secretly planted on Goliath.

Demona retrieves the Medici Tablet and is then chased by the Hunter Stuart Canmore during a 1495 flashback in Florence, Italy.

Elisa and Jason go to the warehouse where Demona stole the DI-7, and Elisa tells Jason vaguely about what happened to Angela, and they make a connection. Elisa confronts Owen at the site, who tells her that Xanatos had no part in Demona's or the Hunter's schemes.

Dominique Destine introduces Robyn to Sevarius at Nightstone Unlimited, who is there helping Demona construct the CV-1000 Carrier Virus for her plan to destroy all humans.

Elisa invites Jason to her apartment. Both are attracted to each other, and they kiss, but Elisa pulls back, torn about her feelings for Goliath. She tells Jason that there's someone else in her life but that they can't be together romantically, and Jason leaves.

Jon once again tries to convince Jason that the other gargoyles may not be in league with Demona, and that they were only after the Hunters because they hurt Angela. Jason berates him, however, and Jon ceases to argue.

Elisa walks into the station at the same time Robyn releases a bomb into the clocktower. Worried for her safety, Jason makes a grab for her upon his flitter.

"Yes. No, not really...I mean, there's someone I care for deeply, but it would be impossible to get involved with him." - Jason and Elisa

"Perhaps you can have a little of both."
"There's no such thing as a little vengeance." - Goliath and Demona

"Perhaps not." - Demona and Goliath

The deliberate echoes of the first season, and particularly "Awakening", continue. These include:

When Matt Bluestone is being grilled by Jon Canmore in his reporter's guise, he tries changing the subject to the stone heads on Easter Island, as a reference to "Sentinel" (evidently Elisa told him about a few of her Avalon World Tour adventures).

A deleted scene from this episode (cut for time considerations) had the door to the Hunters' airship, after being wrenched off its hinges by Goliath during his break-in, land on the sidewalk below in front of a startled Vinnie.