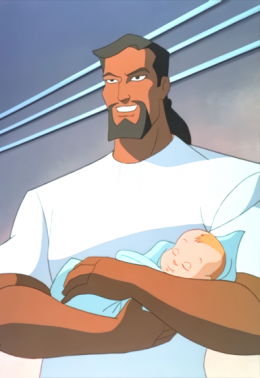 Alexander Fox Xanatos is the son of David Xanatos and Fox.

Alexander was born at the Eyrie Building on July 9th, 1996, the same night that Goliath and his companions returned to New York from the Avalon World Tour. Because Titania is his maternal grandmother, Alex is a halfling (or, more accurately, a "quarterling"), with magic in his blood. Titania therefore attempted, with Oberon's help, to abduct him upon his birth and take him away to Avalon, where he could be taught to use his powers. Xanatos (using numerous technologies including the Iron Clan), Goliath and his clan, Renard (using his airship and cybots), Petros Xanatos, and Puck all attempted to stop Oberon from kidnapping the child and were defeated; however, Fox, in utter desperation, unleashed a bolt of magical energy upon Oberon, which Goliath used as proof that Alex could be taught magic in the outside world. So Oberon and Titania agreed to let Alex stay with his parents, and assigned Puck the task of being Alex's tutor, although barring him from using his powers except to teach him and protect him. ("The Gathering Part One", "The Gathering Part Two")

Puck gave Alex his first lesson in magic not long afterwards, when he taught him how to transfer souls from one body to another, housing the souls of the Coldtrio first in the bodies of Broadway, Angela, and Brooklyn, and then in their robotic bodies that Xanatos had built for them. To assist him in his spell-casting, Alex temporarily housed himself in Lexington's body, using his mouth and voice box to utter the right incantations. This began the strong rapport between Lexington and Alex that has continued since, and which has helped Lexington make his peace with Fox. ("Possession", "The Journey") Alex seems to be growing and maturing very quickly. At four months old he was already beginning to talk (his favorite word being "doggie"), and Ambassador Chung speculated he looked at least a year old. ("Masque")

At some point in the near future, Alex will be temporarily kidnapped by Raven, for reasons as yet unknown, but rescued (with Lexington as one of the rescuers). [1]

In 2198, Alexander (under the name of Alexander Xanatos IV, the "IV" perhaps having been adopted as a disguise to conceal the fact that he’s over two hundred years old), is the Secretary-General of the United Nations, with Owen Burnett as his Chief of Staff. However, Alex is abducted by the Space-Spawn along with the rest of the world leaders at Queen Florence Island on March 21st, and kept in stasis by them. One result of this is that Owen is unable to turn back into Puck, since at this point, he can neither protect nor teach Alexander. [2][3]

Alex was named by his parents after Alexander the Great, the famous Macedonian king (336 B.C. - 323 B.C.) who conquered most of the known world, as a reflection of their ambitions for him. [4] It has yet to be revealed whether Alex's long life will be the result of science or sorcery. [5] 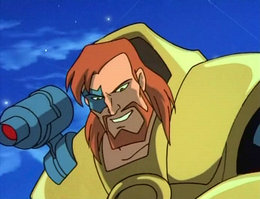 In the episode "Future Tense", Alexander, at that point called Fox, was a part of a resistance against his father, David Xanatos. Xanatos the senior tricked him into revealing the hideout of the rebels before destroying him. His fellow rebels were inspired to attack Xanatos before he could strike against them.