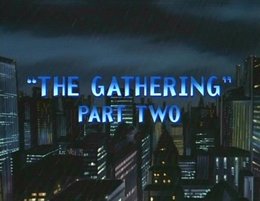 "The Gathering" Part Two is the fifty-eighth televised episode of the series Gargoyles, and the forty-fifth episode of Season 2. It originally aired on April 30, 1996.

Intent on kidnapping Alexander, Oberon tries desperately to penetrate the force field around the Eyrie Building. Xanatos uses his Iron Clan robots to try to defeat him, while Halcyon Renard sends out his cybots, and the Manhattan Clan comes to aid them. Renard is able to sap some of Oberon's strength with an energy net of cybots, forcing him to shrink to normal size, and Petros Xanatos ages him temporarily when he shoots him with an iron harpoon, but Oberon is still able to break through the shield and defeat all his adversaries. Owen appears at that moment, and in a surprise twist, reveals himself to be Puck, though he too is unable to stop Oberon. Oberon is about to take Alex, but he's stopped when Fox blasts him with a burst of magical energy. Goliath uses Fox's outburst as a means to convince Oberon to let Alex stay with Puck as his tutor. Oberon agrees, and Titania hints that this was the outcome she had been planning for all along.

Puck uses his magic to illustrate his current predicament; basing his appearance on that of Preston Vogel, and working for Xanatos and Fox after leaving the employ of Anastasia and Renard. He revealed himself to Xanatos, offering either one wish or a lifetime of service from Owen, to which Xanatos chose the latter.

Oberon banishes Puck from Avalon forever, and strips him of his magic unless training or protecting Alexander.

Xanatos promises Goliath that he will repay him for helping to save Alexander.

Owen Burnett is revealed to be Puck in this episode. Oberon charges Puck to teach Alexander Fox Xanatos to use magic, allowing him to skip the Gathering as he'd wanted but also forbidding him from returning to Avalon or using his magic powers (except when training or protecting Alex).

The Iron Clan robots first appear in this episode. Although they were built specifically to fight against Oberon, Xanatos and Owen must have clearly found them useful beyond that purpose, since one of them appears in "Rock & Roll", to do battle with the gargoyles.

Oberon comments just before his departure that the humans of Manhattan will awaken from their enchanted slumber and the events from the previous night will seem to them like "naught but a midsummer night's dream", a reference to the play that he, Titania, and Puck were drawn from.

Puck's Flute from "The Gathering Part One" was originally suppose to be used by the Trickster himself to briefly subdue Oberon.[1]

Greg Weisman had further plans involving Oberon and Titania for later in the series. The chief of these was the escape of Queen Mab, Oberon's mother and predecessor as ruler of the Third Race; Oberon had long ago overthrown Mab and imprisoned her, but she would at some point break free from her prison, with serious ramifications for not only Oberon and the Third Race, but for the outside world as well. (Queen Mab, of course, was drawn from Shakespeare as well: Mercutio's speech about her from Act I, Scene iv of Romeo and Juliet.)

This episode contains one of the most hotly-debated moments in Gargoyles, when Titania whispers something into Fox's ear. Gargoyles fans have besieged Greg Weisman with questions about just what Titania said. He has refused to answer, confirming only that it was not a non sequitur.[2] A similar scene happens in "Louse" when [[Robyn Canmore |Hunter]] whispers into Yama's ear to keep him from killing Fang.

Terrence Mann's name is misspelled as "Terrance Mann" in the credits.

The shot of Petros Xanatos's harpoon going into Oberon's chest was edited out of the Toon Disney broadcast of the episode.