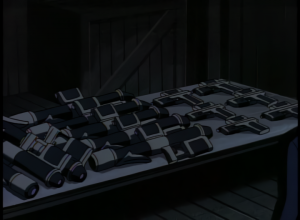 Particle Beam Weapons are advanced non-projectile weapons designed by Xanatos Enterprises. The weapons are equipped with a laser sight for aiming the otherwise invisible particle beam.

In 1994 a shipment of three-hundred-twenty-two particle beam weapons (of various sizes, styles and power ranges) was stolen by Tony Dracon, with his gang arming themselves with several of the guns. Goliath destroyed the stolen guns in Dracon's warehouse, except for approximately thirty-seven of them, which had already been sold on the street.

Demona also has her own arsenal of particle beam cannons (most likely supplied by Xanatos when they were allied), as does Thailog. Whether these guns were stolen or bought legally is unknown, although Nightstone Unlimited may manufacture them now as well.

As mentioned above, Owen Burnett estimated that at least thirty-seven particle beam weapons stolen by Tony Dracon had gone missing. In his ramble for "Deadly Force", Greg Weisman noted that early on in the show's production, he (and by extension, Broadway) had meant to keep track of how many weapons were still missing. [1] These listed below have since been accounted for. Note that none of the weapons used by Xanatos, his employees, or allies like Demona are included on this list.