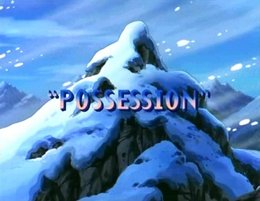 "Possession" is the sixty-second televised episode of the series Gargoyles, and the forty-ninth episode of Season 2. It originally aired on May 8, 1996.

Several attempts by Xanatos and Owen to segregate the three souls of Coldstone fail, so Puck decides to get the job done as a means to teach Alexander a magic lesson. Puck poses as Goliath and goes to the clock tower, where he uses a magical spell to temporarily transfer the souls of Othello, Desdemona, and Iago into the bodies of Broadway, Angela, and Brooklyn, respectively (though none of the gargoyles knew about the latter). Puck and Alex then transfer into Coldstone, and lure the true Goliath and Hudson to the Eyrie Building, where Puck activates the Coldsteel and Coldfire robots and uses them to defeat the two gargoyles. The others go to the castle to save them, and a fight amongst the gargoyles, robots, and Puck (inside Coldstone) ensues. Iago is impressed with the Coldsteel robot, confessing that he would like to trade Brooklyn's body for it. Alex (inside Lexington), speaks the soul transference spell to grant Iago's request, then speaks it again for Othello and Desdemona who volunteer to inhabit the Coldstone and Coldfire bodies.

Othello and Desdemona take some time to enjoy the sensations in the bodies of Broadway and Angela, while Iago, in the body of Brooklyn, eggs them on. When it appears as if Iago has taken over Coldstone's body, Othello entertains the idea of him and Desdemona staying in the bodies of their hosts forever, though she has reservations. At the end of the episode, they realize that doing so would be wrong, so Puck is able to transfer them to the Coldstone and Coldfire bodies.

Coldsteel escapes, and Coldstone and Coldfire chase after him, promising to return once he's no longer a threat.

"You can do more than that Owen, if you were to transform into Puck and wiggle your nose or something." - Owen and Xanatos

Coldstone appears for the first time since "High Noon". He is discovered in the Himalayas, a reference to a story that Greg Weisman had planned to write for the Marvel Comics Gargoyles series before its cancellation, and which was eventually adapted into the flashback scenes of "Reunion". In it, Goliath, Elisa, Angela, and Bronx encounter Coldstone in the Himalayas during the Avalon World Tour. This also explains why Angela does not have a very strong reaction to first seeing Coldstone in the episode, since she had seen him before.

Coldstone's three personalities are separated into three separate bodies in this episode. Othello remains in the original Coldstone body, Desdemona is transferred to Coldfire, and Iago is transferred to Coldsteel. Coldsteel next appears, without Coldstone or Coldfire, in "Reunion", and then again in "The Rock". Coldstone and Coldfire reappear at the end of "Rock & Roll". They will finally accept Goliath's invitation to rejoin the clan (made in this episode) in "Phoenix".

Puck is seen tutoring Alex for the first time since he had been instructed to do so by Oberon in "The Gathering Part Two".

Xanatos says that he constructed the two robot bodies to repay Goliath for helping to save Alexander (in "The Gathering Part Two"), though it's likely he had other motives for constructing them (as is made apparent in "The Rock", "Rock & Roll", and "Rock of Ages").

Broadway and Angela feel a deeper connection thanks to the two lovers occupying their bodies for a time, leading to their becoming a couple some time before "The Journey". Similarly, after Alex possesses Lexington's body to cast the soul transference spell, a bond of friendship is formed between the two (again, as seen in "The Journey").

"Possession" was originally intended to be two stories, one about the Coldtrio, the other about Puck tutoring Alex; the original concept for the latter was that Raven, Coyote the Trickster, and Anansi would apparently attempt to abduct Alex, though why is uncertain (since Titania had been satisfied with the arrangement at the end of "The Gathering Part Two", she surely would have no reason to send them on this mission, and it is hard to imagine the three tricksters leaving Avalon without her and Oberon's permission). When "Possession" became a single story, the projected Tricksters episode was initially moved to Season Three, then drastically altered (once Greg Weisman left Gargoyles and the series became The Goliath Chronicles) into "Ransom", where Alex's abductor was a villainous mayoral candidate who was exploiting the gargoyle issue in the hopes of getting elected to office.

Xanatos alludes to the television series Bewitched when he suggests that Owen turn into Puck and "wiggle your nose or something".

While the television episode never mentions where Xanatos and Fox were going when they went out for the evening, according to one of the outlines, they were attending a performance of Verdi's Otello, a reference to the Shakespearean counterparts of the Coldtrio that unfortunately did not make it into the final version.

The opening of the soul transference incantation, "For the spirit to be willing, the flesh must first grow weak", is based on the Biblical passage "the spirit indeed is willing, but the flesh is weak". (Matthew 26:41)

This is the only episode of the series where Elisa Maza neither appears nor is mentioned.

In a quick blink-and-you'll-miss-it cut, Hudson's sword slicing through Coldsteel's tentacles has been removed.