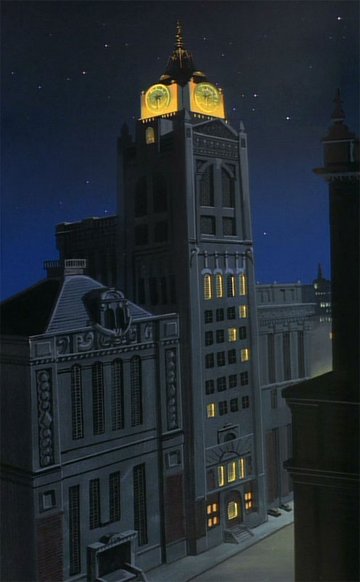 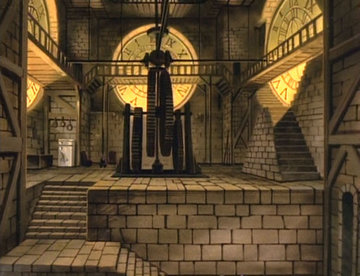 The Clan's home inside the clock tower.

The Clock Tower is the central structure of a Manhattan Civic Center encompassing an entire city block, located on the lower end of midtown and was, for a time, the home of the Manhattan Clan.

The Civic Center below the Clock Tower contains city hall, a local power station, a public library and the local police station (the 23rd Precinct house). The Clock Tower itself is a massive Gothic structure with four huge clocks (one facing each direction) and topped by a huge spire.

In early 1995, the Manhattan Clan needed a new home. Their friend, Elisa Maza, had investigated the Clock Tower and found it to be a perfect new home for the clan. Eventually, she convinced Goliath and the other gargoyles to leave their ancestral home at Castle Wyvern (which was now atop the Eyrie Building) and move into the Clock Tower. ("Enter Macbeth")

They soon made the Tower a comfortable residence. The Tower was already equipped with a small utility-style bathroom and electricity. [1] Elisa brought the gargoyles a television set ("The Edge") and a video game and they also acquired a hotplate, a laptop computer and many books and videos. An old recliner and a broken refrigerator were also found and brought in by air. Lexington not only managed to repair the fridge, but also tinkered constantly with the massive clock itself. Thus, there were times when the clocks were working and there were times when they were broken down. [2][3]

The interior of the gargoyles' home was accessible from the building below by a pull-down service ladder in a broom closet. Another area of their home was the "back room" where, for a time, the Grimorum Arcanorum, the Eye of Odin, half of the Phoenix Gate and the comatose Coldstone were kept. ("Vows") The Mayan Sun Amulet was also kept there for safekeeping. ("The Green") A haystack (for unknown reasons) could also be found by a flight of stone stairs. ("Metamorphosis") [4]

The Clan remained in the Clock Tower for the remainder of 1995 and most of 1996. However, in October of that year the Hunters arrived in New York City and followed the gargoyles back to the Clock Tower using a tracer placed on Goliath. Unwilling to risk waiting for dawn, Robyn Canmore decided to destroy the Tower with the entire clan inside using missiles fired from the Hunters' Airship. Fortunately, the clan had enough warning to take cover in the broom closet and thus survived the explosion. The Clock Tower was completely destroyed. Though Robyn Canmore had insisted the attack would be a surgical strike, extensive damage was done to the 23rd Precinct house below the gargoyles' home, and many people, including Maria Chavez, were injured.

The Hunters broadcasted images of the Clan fleeing their devastated home to the world and thus the gargoyle species was revealed to humanity as a whole. Soon after the attack, the Clan returned to live at Castle Wyvern. ("Hunter's Moon Part Three")

After the Clock Tower was hit, Elisa collected various mementos from the wreckage, including a photograph of herself in the Belle dress dancing with Goliath. She also gathered other things like books and the gargoyles' radio equipment. [5][6] It is likely she also picked up Zafiro's Sun Amulet, though Broadway might have also gone to retrieve it. [7]

It was decided to repair the damage done and rebuild the Clock Tower, though in a slightly different style. Days after its destruction, the ruined Clock Tower became the site of Goliath and Elisa's first battle with John Castaway. By the beginning of 1997, the Clock Tower was still under heavy reconstruction though it seemed to be nearing completion. ("The Journey", "Estranged")

The Clock Tower itself is fictional, of course, but similar structures actually do exist in New York.

An unused story idea involved the Manhattan Clan disabling the clock's chimes due to the deafening noise it made. As a result, the city would have decided to send someone (potentially Vinnie Grigori) to repeatedly attempt to fix the broken clock. [9]

Some Canon-in-Training information for this article was taken from the Series Bible. [10]