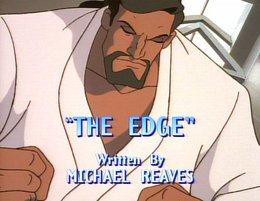 "The Edge" is the tenth televised episode of the series Gargoyles, and the tenth episode of Season 1. It originally aired on January 13, 1995.

The gargoyles are settling into their new home when Xanatos causes trouble by stealing the Eye of Odin in his new gargoyle battle armor after he had donated the jewel to the Museum of Modern Art. After Elisa notices the "Steel Clan" robot and reports to the clan, Goliath goes to confront Xanatos at the Eyrie Building, and is attacked along with the rest of the clan on the way back by the disguised Xanatos and two Steel Clan robots. They get the best of the gargoyles, but stop short of killing them, waiting for them to lead them to their new home. Goliath instead leads them all to the Statue of Liberty, where the two robots are destroyed and Xanatos retreats. Despite his failure, Xanatos is proud that he was able to stand up against Goliath on his own.

Xanatos and Owen engage in a judo match. Xanatos is surprised to be beaten by Owen for the first time.

Elisa brings the gargoyles a television set. While watching the news, they come across Travis Marshall interviewing Xanatos about donating the Eye of Odin to the museum. Goliath becomes enraged and storms out.

Elisa is partnered up with Matt Bluestone for the first time, though she is not happy about this. Matt tells Elisa about the Illuminati, and witnesses Xanatos leaving the museum in his gargoyle exo-frame. Matt shoots a bullet at him, which is repelled.

Travis Marshall reports on the news about the theft by the "gargoyle-like creature." The public begins to worry, and Elisa is afraid for the gargoyles when they go out to confront Xanatos.

Xanatos proposes to Goliath to have the clan stay at his upstate facility instead of in the city. Goliath becomes enraged at this, and realizes that Xanatos' aim is to dominate and control the clan.

Elisa attempts to follow the clan to the Eyrie Building in her car, dragging Matt along, and at the same time trying to keep her partner in the dark. Owen prevents them from entering the Eyrie.

"Yeah? Well that's usually the time you need one the most." - Elisa and Matt

"Because of you!"
"If you want to be picky, we won't get anywhere." - Xanatos and Goliath

The episode sees the full introduction of Matt Bluestone (who first appears in a non-speaking role in "Deadly Force") and Travis Marshall. There is also a glimpse of Derek Maza as Elisa and Matt's helicopter pilot.

The Eye of Odin is also first introduced in Gargoyles. It originated in the Gargoyles video game, and so intrigued Greg Weisman that he proceeded to write it into the series (though Greg feels disappointed that the Eye in the animated series did not look as Norse as the Eye in the game).

The Emir is first mentioned in the opening scene between Xanatos and Owen, here merely to provide a brief look at the world of movers and shakers that Xanatos operates in. Greg Weisman had not yet planned to turn the Emir into an on-stage character, although the Emir is mentioned again in "Double Jeopardy" and finally appears in "Grief". [1]

The Illuminati also receive their first mention, in Matt's conversation with Elisa. Although they would later become an on-stage element in the series, their original introduction, as planned by Michael Reaves, was done for a much simpler reason: Reaves wanted to make Matt's suspicion that the gargoyles were out there (which would lead to his investigation of them) believable, and decided that if he was portrayed as a conspiracy theorist, the audience would be more ready to accept his pursuit of the clan.

Elisa, displaying her skepticism towards Matt's Illuminati theories, says; "I don't care about UFOs, Loch Ness, or secret societies." This is an ironic statement, since she would encounter both the Loch Ness Monster and an extra-terrestrial (Nokkar) during the Avalon World Tour, in the following season.

As in "Enter Macbeth", Goliath again shows a penchant for the classics, this time reading Dostoyevsky.

In this episode, Xanatos dons his red, Goliath-shaped armor for the first time. The gargoyles assume that it is a more advanced version of the Steel Clan robots they fought in "Awakening", and will continue to assume this until "Reawakening".

During their televised interview, Travis Marshall and Xanatos mention Xanatos' recent incarceration (he was jailed between "Awakening: Part Five" and "Enter Macbeth").

Xanatos's choice of the Museum of Modern Art to donate the Eye of Odin to seems surprising, since the Eye could hardly be modern art, in light of its background as revealed in Season Two. Greg Weisman has suggested that Xanatos chose the MOMA based on it having poor security, but fine security camera surveillance - just what he needed for his plan.

The security guard on duty at the MOMA on the night that Xanatos steals back the Eye briefly addresses a painting that is clearly either Edvard Munch's The Scream (which isn't on display there in real life), or modelled upon it.