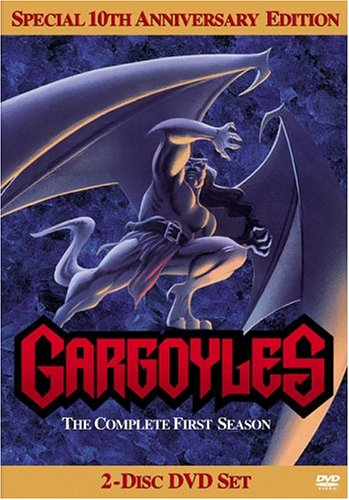 Gargoyles: The Complete First Season was released on DVD on December 7th, 2004. [1] News that Disney was planning to release the series on DVD was first announced at the 2002 Gathering with tentative plans for the first release in 2003. [2] In April 2003, it was announced that Disney was pushing back the release of the DVD to 2004 to coincide with the show's tenth anniversary. [3]

Experience all 13 thrilling episodes of GARGOYLES' first season in this spectacular 10th anniversary 2-disc DVD set, complete with exclusive bonus features. It's action-packed animation at its very best! For 1,000 years, a race of heroic creatures has been frozen in stone -- the victims of human betrayal. Now, with the magic spell broken, these amazing Gargoyles awaken from their slumber to find themselves transported from the moors of Scotland to the bustling metropolis of New York City. Follow each suspenseful episode to find out if this proud clan of winged warriors will seek revenge on the race that betrayed them.