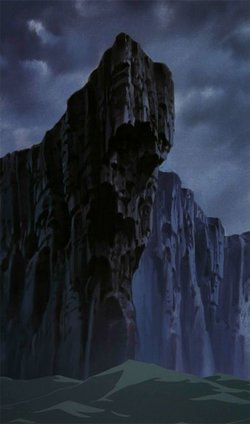 Wyvern Hill is the hill upon which Castle Wyvern once stood, on the western coast of Scotland.

It was a home for gargoyles since time immemorial, and also had a series of human strongholds built upon it, whose builders and occupants formed a series of (temporary) alliances with the local gargoyle clan. The present-day Castle Wyvern, built in 971 and sacked in 994, was the last such stronghold. Close to Wyvern Hill is also a Cavern once used by the Archmage and used by Hakon and his band of Vikings. It was the former home of Princess Katharine, the Magus and Tom who would find their way to the magically Island Avalon. ("Long Way To Morning", "Awakening Part One", "Avalon Part One") [1]

Hakon and the former Captain of the Guards of Castle Wyvern fell to their deaths off the cliffs after pursuit by Goliath, though their ghosts remained in the area due to the magic of the cavern. ("Shadows of the Past")

In 1995, Tom (now the older Guardian of the Eggs) left Avalon to see if it was safe for Katharine, Magus, the Avalon Clan and himself to live in the mortal world again. He found himself in Wyvern which was without the castle, and discovered in the village that it was moved atop a skyscraper in Manhattan. The Guardian explores the hill and caverns, unaware that his presence alerts the ghost that their enemy might be alive.[2][3][4]

In 1996, Goliath, Elisa, Angela, and Bronx visited Wyvern Hill during the Avalon World Tour for Goliath to help the Captain to atone for his past crimes. Later that year, Wolf encountered Hakon's ghost at Wyvern, and left a motorist stranded in the process. ("Shadows of the Past", "Vendettas")

The surrounding area, including the Archmage's Cave, is considered "a nexus of power" or "holy ground". [5]

At some point between 1996 and 2188, gargoyles (possibly descended from the original Wyvern Clan - most likely via the Avalon Clan, Labyrinth Clan, and Manhattan Clan) will resettle here and found a new clan at this place. They will also be known as the Wyvern Clan. [6]

The hill may have been named because of the resident gargoyles; in medieval legend, a wyvern is a two-legged dragon, and it is quite possible that superstitious Scotsmen may have found it easy to confound gargoyles with dragons or wyverns. When directly asked if there was a reason the hill was named after a dragon species, Greg Weisman replied, "if you come to a Gathering, you'll get a clear hint of what that is when you see the DARK AGES pitch". Although the pitch does show the alliance between humans and the local clan, it also includes an image of gargoyles fighting a dragon. [7] The Archmage is also seen scheming with his ally Iago, who is known to use the phrase "by the dragon". 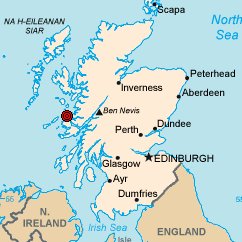 In a response on May 26, 2004, Weisman speculated on Ask Greg that Wyvern Hill, if it were real, was near the Point of Ardnamurchan some 83 miles from Castle Urquhart on Loch Ness. [8]