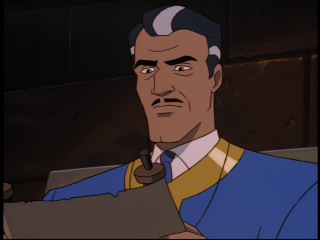 The Emir was a Middle Eastern nobleman (his real name is as yet unknown) who was allied with Xanatos.

When Xanatos decided to obtain immortality by forcing it out of Anubis, he assigned the task to the Emir, sending him to Egypt with Jackal, Hyena, Wolf, and Coyote 3.0 to assist him. But the Emir had his own personal agenda in summoning Anubis; he had lost his only son to a fatal automobile accident two years before, and wanted the jackal-god to restore him to life.

Anubis refused to bring the Emir's son back to life, however, and in desperation, he used the Scroll of Thoth to make himself an avatar of the death-god. However, Jackal, who had become intrigued by Anubis, intervened to become Anubis' avatar instead, and promptly decided to use his new-found powers to destroy all life on the planet.

With some prodding from Goliath, the Emir at last realized his folly, and atoned for his earlier act by using the Scroll of Thoth again to transfer the avatarhood from Jackal to himself, and then undoing as much damage that Jackal had done during his avatarhood as was possible. Realizing now that attempting to bring back his son was wrong, the Emir instead sealed off the underground complex beneath the Sphinx where he had performed his act, and then presumably died, to be reunited with his son - and in the process, no doubt setting Anubis free. ("Grief") [1]

While the Emir's initial mention in "The Edge" was more-or-less a throwaway line from writers Michael Reaves and/or Steven Perry, the line quickly stuck with Greg Weisman. By the time he was mentioned again in "Double Jeopardy", Weisman was already considering the Emir's role in "Grief". [2]