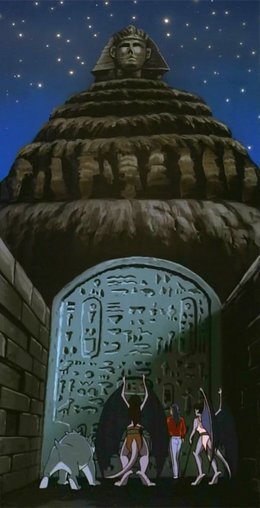 For the character of the same name, see Sphinx (New Olympian)

The Sphinx is a famous monument in Giza, Egypt.

The Sphinx is of ancient origin. Goliath remarked that it was already very old long before he hatched.

Between the Sphinx's front paws lies a secret doorway. Beyond this door lies a staircase leading up inside the monument into several chambers, including at least one burial chamber. Inside the Sphinx's head is a large temple. This is where the Emir and the Pack summoned Anubis using the Scroll of Thoth and the sacred tanna leaves. Goliath and his companions encountered Anubis, the Emir, and the Pack in this temple when they came to Egypt on the Avalon World Tour. Afterwards, the Emir sealed off the complex so that nobody could ever enter it again. ("Grief") 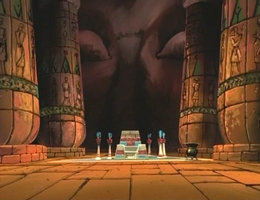 The Sphinx was built by the Pharaoh Khafre in the middle of the 3rd millennium B.C.E. as a monument to himself, depicting himself in the form of a sphinx, a lion with a human head. It ranks alongside the Pyramids as the best-known symbol of ancient Egypt.