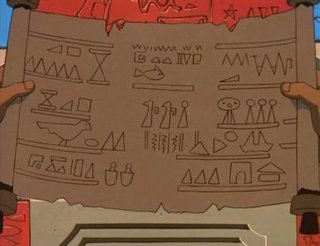 The Scroll of Thoth

The Scroll of Thoth, also called the Papyrus of Thoth was an ancient scroll created by the Egyptian god Thoth.

The Scroll of Thoth (with the assistance of Tanna Leaves) enabled a user to summon and imprison Anubis. It also contained a magical spell that allowed its reciter to become an avatar of the Jackal God, partly by invoking the power of the Egyptian gods Osiris, Isis and Set. The Emir used this scroll to become Anubis' avatar (although the first time that he attempted it, Jackal intervened to make himself the avatar instead). The Scroll of Thoth was presumably lost forever after the Emir sealed off the temple within the Sphinx where he had summoned Anubis. ("Grief")

The scroll bears some resemblance to the Book of Thoth, a legendary book of powerful magic spells said to have been buried with the Egyptian Prince Nekerkaptah.