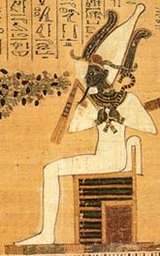 Osiris is a supernatural being who was worshipped as a god in Ancient Egypt. He is considered a death god like Anubis.

Osiris is a death god. Whereas Anubis is more a part of the fabric of death (and thus less concerned with being in charge), Osiris became "the boss" by virtue of bringing rank to the table. [1]

In 1995, the Emir used the Scroll of Thoth to bind the jackal god Anubis with a spell that invoked the power of Osiris, Isis and Set.