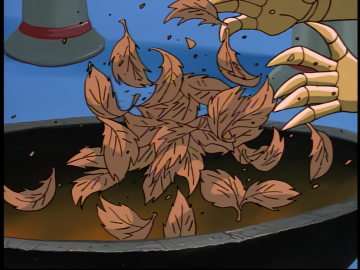 Tanna leaves were used along with the Scroll of Thoth to summon Anubis.

The Emir referred to the tanna leaves as “sacred.” Their origin is unknown but Coyote had to leave the Sphinx to get them. The leaves gave Hyena hay fever.

Tanna leaves are fictional and are a reference to the 1940 film, The Mummy’s Hand.

Michael Reaves had previously wanted to use tanna leaves in the Batman: The Animated Series episode, “Avatar", which he also wrote. [1]