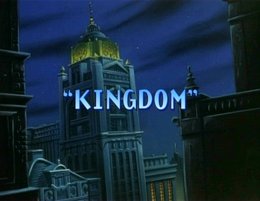 "Kingdom" is the thirty-ninth televised episode of the series Gargoyles, and the twenty-sixth episode of Season 2. It originally aired on February 5, 1996.

Hudson and the Trio appear for the first time since Goliath, Elisa and Bronx disappeared in "Avalon Part One". They learn the reasons for their clanmates' absence sometime between now and their next appearance, in "Pendragon".

The Mutates appear for the first time since the formation of the Labyrinth Clan in "The Cage". They next appear in "The Reckoning".

Al, Chaz and Lou are introduced. Al next appears in "Invitation Only", still a member of the Labyrinth Clan; Chaz and Lou later join the Quarrymen.

The Mutates and David Xanatos learn in this episode that Goliath, Elisa and Bronx are missing. Greg Weisman has mentioned that he's since figured out "a good flashback to be had someday in some medium" on how Xanatos would've taken advantage of that knowledge. [1]

Fang is imprisoned in the Labyrinth at the end of this episode. Thailog will free both him and Demona in "The Reckoning".

In one of the series' more notorious animation errors, Bronx briefly appears when the gargoyles are preparing to enter stone sleep at the clock tower, and Hudson appears in two places on the clock tower. This error is referred to as the "Two Hudsons and a Bronx Scene".

The scene of Chaz and Lou getting the guns out of the case is edited out of the Toon Disney broadcast of the episode. Some of the later battle scenes also have cuts (you can tell by the fact that the rifle blasts are slowed down to cover up some of the edits).