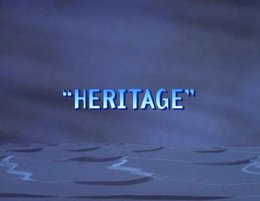 "Heritage" is the thirty-eighth televised episode of the series Gargoyles, and the twenty-fifth episode of Season 2. It originally aired on November 27, 1995.

Elisa quotes the famous line from Hamlet, "There are more things in heaven and earth..." - bringing yet another piece of Shakespeare into Gargoyles.

Raven's lies would later on be converted into truth, according to Greg Weisman; at the beginning of his projected sequel series, Gargoyles 2198, a new clan would be founded at Queen Florence Island. That same series would also include among its major characters a descendant of Natsilane (who would also be related to the Mazas, though just when the two families intermarried has not yet been revealed).

Raven refers to Grandmother as his cousin; this is a (much-neglected, alas) sign that the title "Oberon's Children" for the Third Race should not be interpreted literally.

Although Natsilane is a member of the Haida nation, during the battle against Raven he is dressed like a stereotypical "Plains Indian" chief, very different from traditional Haida garb. This is most likely an error due to oversight.