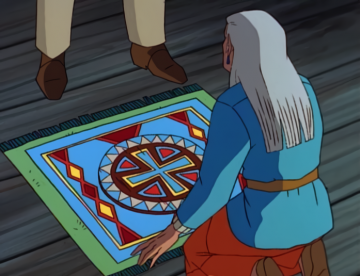 The Haida are a Native American tribe (or nation) living on the northwest coast of North America. One band lives on Queen Florence Island, of which Natsilane is a chieftain in the late 1990's.

The Queen Florence Island had been dying off for some time, and, in late 1995, the Queen Florence Island band of Haida held a tribal meeting where most of the people chose to abandon the island. [1] Natsilane, a trained scientist, was unable to ascertain the problem until the Avalon World Tour brought Goliath, Elisa Maza, Angela, and Bronx to the island in 1996. With their help, Natsilane discovered that Raven was responsible for the ecological disaster. After Natsilane defeated Raven in battle, the island was revived with Grandmother's assistance and the Haida people returned to the island. ("Heritage")

Though gargoyles have never lived with the Haida people, over the years the Haida will develop a good relationship with the Gargoyle Nation and between 2188 and 2198 they will invite the gargoyles to establish a new clan on the island. [2][3] The Gargoyle Nation will accept this offer and eventually the Liberty Clan will be formed on Queen Florence Island. [4] How the Haida people will fare during the attack of the island by the Space-Spawn is uncertain.

The Haida people's traditional homeland is the Queen Charlotte archipelago, which they call Haida Gwaii.