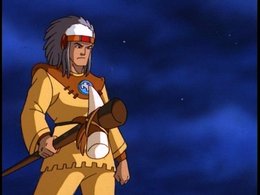 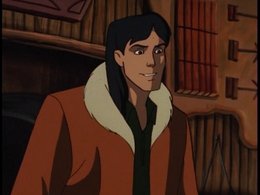 Natsilane is the young chieftain of the Haida on Queen Florence Island. He goes by the Western name of "Nick".

Harvard-educated, Natsilane was skeptical about the legends and beliefs of his people, particularly the old tales of Raven lurking on a volcano top and periodically laying waste to the island. When Raven made his most recent attempt to seize control of Queen Florence Island in 1995, Grandmother urged Natsilane to challenge the trickster as his ancestors had done, but he refused to believe her. Elisa at last introduced Goliath, Angela, and Bronx to the young man, to show him that mythical beings did exist; Natsilane at last accepted that Raven existed, sought him out at his volcano lair, and defeated him in single combat using a traditional shield and spear which, when combined with Natsilane's heritage, became magically enhanced. [1] Presumably, he became more ready to heed the old ways of his people afterwards. ("Heritage")

During the battle against Raven, Natsilane is not wearing traditional Haida clothing. He is instead dressed like a stereotypical "Plains Indian" chief, probably an error due to oversight.

The name "Natsilane" is derived from a culture hero of Native American mythology, specifically that of the Tlingit people of Western Canada. The Tlingit and Haida are aware of each other, although the Tlingit live on the mainland and the Haida live on islands out to sea. Natsilane was most famous for having created the first Killer Whale out of a block of wood.