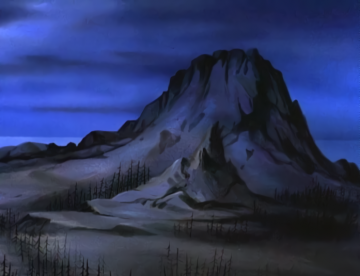 Queen Florence Island is an island off the western coast of Canada, home to a group of the Haida people.

Raven wished to claim it for his own, and so would periodically magically lay it waste, forcing the humans and animals who lived there to flee so that he could have it all to himself. Then, at Grandmother's urgings, the current Haida chieftain would climb to the top of the volcano where Raven lived and battle him, driving him away and restoring prosperity to the island.

Goliath and his companions visited Queen Florence Island on their second stop on the Avalon World Tour, and helped Grandmother persuade Natsilane to do his part in facing Raven in battle. This was initially not easy, however, for Natsilane was a modern scientist and skeptic who did not believe in the existence of magic and Raven duped Goliath into believing that he was part of a gargoyle clan living in hiding at the volcano and persecuted by the humans; fortunately, Goliath learned the truth from Elisa and Grandmother before it was too late. ("Heritage")

Sometime between 2188 and 2198, Raven's lies become truth when the Haida people invite the Gargoyle Nation to establish a new clan on the island. [1] Every gargoyle clan leader brings their clan's eggs to the island in preparation for the hatching on March 21st, 2198 to hatch together as a sign of gargoyle unity. That night, as the world leaders gather at the volcano with the gargoyle leaders and eggs, the Space-Spawn attack and kidnap all present in the caldera. [2] After the Space-Spawn are defeated, the Liberty Clan will be reestablished on the island. [3]

Queen Florence Island's most distinct characteristics are the huge volcano caldera and the Haida village near the coast. The island is covered in forests and is home to many wild animals. 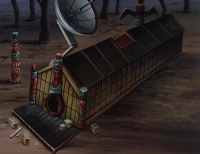 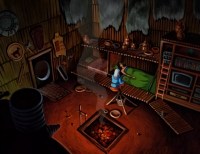 Though the name of the island was inspired by actual Pacific Northwest Islands, especially the Queen Charlotte Islands (the homeland of the Haida Nation, and named Haida Gwaii in their tongue), the name Queen Florence Island was also inspired by Queen Florence Lane -- the street Greg Weisman grew up on. [4]