The Hound of Ulster 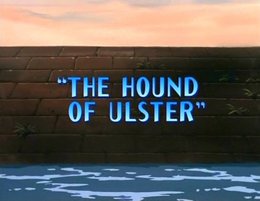 "The Hound of Ulster" is the forty-fifth televised episode of the series Gargoyles, and the thirty-second episode of Season 2. It originally aired on February 6, 1996.

The Banshee captures Goliath, Elisa, and Angela in Ireland and traps them in Cairn na Chullain in order to try and get information about the Gathering out of them. Bronx joins forces with Rory Dugan, who is actually the reincarnated form of Cu Chullain, to save them. Rory's friend Molly tries to stop them, revealing herself to be the Banshee in disguise, and that she has been working to prevent Rory from recognizing his true heritage. Rory finds out the truth about himself and Molly, and together he and Bronx defeat the Banshee and free the others, and Ireland reclaims its hero.

Banshee reveals that Oberon will soon begin the Gathering, and that all Oberon's Children are required to return home to Avalon. She doesn't want to go, and believes the travelers have come to collect her for Oberon.

Before realizing his true heritage as Cu Chullain, Rory feels he is stuck in Ireland with no job or money. His father is disappointed in his son's lack of motivation, but is on the dole himself.

Banshee is introduced in this episode, and mentions both Oberon (who will appear in "Ill Met By Moonlight") and the Gathering. Banshee reappears in "The Gathering" Part One.

Cu Chullain is also introduced in this episode. He will next appear (in flashback, courtesy of Shari) in "Rock and Roll".

A working title for this episode was "A Bronx Tail", a title later on used for an episode of The Goliath Chronicles.

"The Hound of Ulster" includes several hommages to the film The Wizard of Oz. When the travelers arrive in Ireland, Elisa says "I don't think we're in Scotland, or Kansas, either." When the Banshee faces Cu Chullain and Bronx in her Crom-Cruach form, she describes it as "more than enough to deal with a noisy young hero, and his little dog, too". It should also be noted that the little dog in the film is Toto. Toto is Dorothy's pet cairn terrier in The Wizard of Oz. This Scottish breed was named for its use in digging and hunting for prey among cairns (manmade stone structures such as Cairn na Culainn). The fact that Bronx is a dog-like beast of Scottish descent and is attacking a foe that is hiding in a cairn while being referenced to Toto is an incredible coincidence. While one can debate whether Bronx is indeed the Hound of Ulster reborn, perhaps the question should be asked if he is the reincarnation of Toto as well.

Greg Weisman briefly considered the possibility of a spin-off about Rory Dugan and Molly, though evidently so briefly that it never even made the list of projected spin-offs in his Master Plan document. He recently revealed its working title: Heroes of Ulster.

The episode strongly suggests that gargoyle beasts are the original for the "black dogs" of British and Irish folklore. The accounts of these creatures vary from one region of the British Isles to the next, but are generally portrayed as great doglike animals, usually seen at night, formidable and fearsome to behold, but often (though not always) protective beings - a description that certainly applies to gargoyle beasts. On a related matter, Greg at first thought of entitling the episode "The Barghest"; "barghest" being a name for one variety of "black dog", though found in the folklore of Yorkshire rather than Ireland (which makes it just as well that he later dropped it).

"The Hound of Ulster" takes some liberties with Irish legend in its interpretation of Cu Chullain and the Banshee. Not only is the account of Cu Chullain defeating the Banshee an invention of the series, but so is the notion of his being allied to a "great hound", whether a gargoyle beast or otherwise. In the actual Cu Chullain legend, the "Hound of Ulster" was Cu Chullain himself, who had, as a boy, slain the great guard-dog of Culainn the Smith in self-defense and afterwards, to appease the angry Culainn, offered to take over the dog's duties (hence his name, "Cu Chullain" or "the Hound of Culainn"). Also, the Banshee is portrayed as a malevolent faerie whose wailing causes death; in the original Irish folk-tales, banshees are death-omens whose cries foretell death, but do not actually cause it.

The Banshee's monstrous form, Crom-Cruach the Death-Worm, also stems from Irish legend, if with some liberties taken from the original. Crom-Cruach was one of the ancient gods of Ireland, a particularly fearsome and malevolent figure who was finally overthrown by St. Patrick. (His name, incidentally, was taken up by Robert E. Howard in his Conan stories, making Crom the god worshipped by Conan's people, the Cimmerians.) The notion of Crom-Cruach being equated with the Banshee and looking something like a cross between a great serpent and an overgrown insect larva is the invention of Gargoyles again, however.

Rory/Cu Chullain bears a striking resemblance to the Marvel Comics take on Thor. In Marvel Comics, a lame doctor named Donald Blake, visiting Norway, discovers a cane in a hidden cave which turns out to be Thor's hammer Mjolnir in disguise and transforms Donald Blake into Thor when he picks it up (it turns out much later on that Blake actually was Thor all along, temporarily banished to Earth and imprisoned in a human body by Odin to teach him humility). The similarity is unmistakable; in each case, a modern-day person discovers an old stick or cane underground which turns out to be the disguised weapon of a "real" mythical hero or god ("real" in the sense of existing in actual legends rather than being an invention of the writer), which transforms him into that same hero or god. Greg has openly regretted this similarity, and hopes to, if he ever produces further stories about Rory, tone down his resemblance to Thor/Donald Blake in them. [1][2]