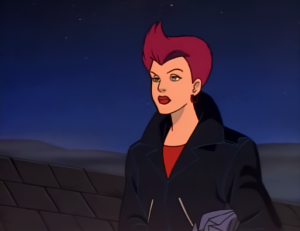 Banshee (Bean Sidhe in Irish-Gaelic) is a Child of Oberon. Molly is the human alter ego that the Banshee assumed for the purpose of preventing Rory Dugan from discovering that he was really a reincarnated Cu Chullain. Crom-Cruach is the animal form of the Banshee, also known as the "Death-Worm".

The Banshee made her home away from home in Ireland, where, during the Heroic Age of Ulster (around the end of the 1st century B.C. and the beginning of the 1st century A.D.), she threatened the entire island. The Irish hero Cu Chullain, aided by the Hound of Ulster, overthrew her, however.

By the late 20th century, the Banshee had returned to Ireland, and there became aware that Cu Chullain had been reborn as the young Irishman Rory Dugan. Wishing to avoid a dangerous rematch with him, she decided to see to it that he never learned of his true identity, and therefore took on the guise of a human girl his age named Molly. As Molly, she encouraged Rory to waste his time in petty thefts, and even suggested that he move from Ireland to America, hoping that this would be enough to prevent him from discovering his heritage.

When Goliath, Elisa, Angela, and Bronx came to Ireland on the Avalon World Tour, the Banshee sensed their presence, and became aware of the fact that they had come from Avalon. Convinced that they had been sent to Ireland by Oberon to drag her back to Avalon for the Gathering, and having no desire to leave Ireland, she captured all of them except Bronx and imprisoned them in Cairn na Chullain, to interrogate them. However, Bronx, searching for help, met Rory, and helped lead him in discovering his true nature. The Banshee, her plans in ruins, cast off her Molly-disguise and battled Cu Chullain and Bronx, but was finally defeated by them. ("The Hound of Ulster") 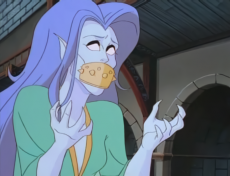 The Banshee with the gag on.

When Oberon held the Gathering not long afterwards, the Banshee ignored his call back to the island. The Weird Sisters were sent by Oberon to discover the Banshee's hiding place, and then they dragged her back to Avalon. After she and Odin engaged in a brief and inconclusive battle there, Oberon pronounced judgment upon her for disobeying him; he placed a metal plate over her mouth so as to strip her of her voice, decreeing that her pride in her voice led to her disobedience and that he would lift it only when she showed true humility in her silence. ("The Gathering" Part One)

The Banshee's future is cloudy at present, but these facts are known: she will eventually, somehow, regain her voice, and she will re-encounter Rory/Cu Chullain, but not quite as an enemy. [1][2] She does have feelings for him, deep down inside, and these feelings will gradually come more and more to the surface. [3] 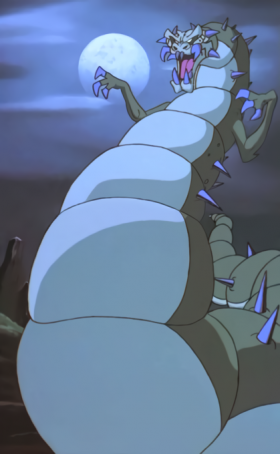 In her regular form, the Banshee looks like a gaunt woman in a tattered green dress with long purple hair and pale bluish-purple skin. She can also take on the form of the Crom-Cruach, or of the human Molly. Her metal plate adapts to her various forms (and can even be glamoured to appear invisible) but she is still unable to speak. [4] Her most powerful weapon in her regular form is her voice, which can mesmerize mortals or cause them considerable pain; indeed, her wailing is supposedly fatal to humans. She is apparently a very minor "death-goddess", but not nearly on the same level as Anubis. [5]

The Crom-Cruach looks something like a gigantic insect larva with fearsome mandibles. The Banshee sometimes assumes this form in battle.

Banshees are a traditional part of Irish and Scottish legend, although not quite as malevolent as the Banshee of Gargoyles. They are generally attached to ancient families, and whenever a member of a banshee's adopted family is about to die, she will appear to deliver her legendary wail, also known as a keening, as a death-omen. Like the Banshee of Gargoyles, the banshees of Ireland have long hair and wear green dresses; they are beautiful, but their eyes are red with weeping. While the name "banshee" means "woman of the Sidhe" in Gaelic, implying that they are indeed faeries, some tales portray them as ghosts rather than faeries.

No banshees appear in the traditional legends about Cu Chullain, but there is an analogous figure to the Banshee in the Morrigan. The Morrigan was an Irish goddess of war and discord, who had something of a love-hate relationship with Cu Chullain. When he was fighting the war-host of Queen Maeve of Connacht single-handedly during the War of the Brown Bull, the Morrigan came to him in the form of a beautiful young woman and offered herself to him. Cu Chullain sent her away, telling her that he was too busy with the fighting for her. In anger, she returned three times to hinder him in the middle of his battle with the mighty warrior Loch, one as a herd of cows, once as a large eel, and once as a she-wolf; he drove her off each time. When he fought his final battle against Maeve's warriors upon the Plains of Muirthemne, she hovered overhead in the shape of a crow, and when he was slain, flew away, mourning him. It is quite possible that, in the Gargoyles Universe, the Banshee and the Morrigan are one and the same. [6]

In Irish legend, Crom-Cruach was a particularly powerful and fearsome Irish god whom it was extremely dangerous to worship. An idol of his, accompanied by the idols of twelve minor gods under his leadership, stood on the plain of Magh Sleacht, until St. Patrick, during his missionary work in Ireland, caused these idols to sink into the ground, banishing them forever.