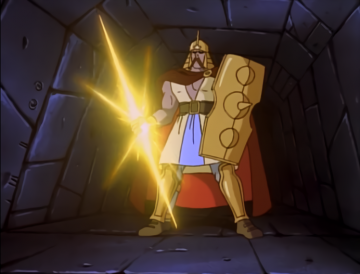 Cu Chullain was the greatest hero of ancient Ireland, who lived in the period between the late 1st century B.C.E. and the early 1st century C.E.

After killing a gargoyle beast, he took the name of Cu Chulainn when he vowed to personally replace the "hound" he killed and even raised and trained another "hound" to eventually take his place. [1][2] This newest gargoyle beast companion would eventually be known as the Hound of Ulster and often fought alongside Cu Chulainn. [3]

One of his leading feats was defeating the Banshee when she threatened all of Ireland. He wielded the Gae Bolga in battle, and even used it to strike the Lia Fáil (which split the stone in half), after it refused to recognize his friend, Lugaid Red-Stripe, as King of Ireland. ("Rock & Roll") When he died, he was buried in the great tomb of Cairn na Chullain, along with the Gae Bolga.

Almost two thousand years later, Cu Chullain was reincarnated as Rory Dugan. Rory rediscovered his true heritage with the aid of Bronx, despite the Banshee's efforts to prevent him from learning it, and Cu Chullain is now restored, to protect Ireland again. ("The Hound of Ulster")

In his original incarnation, Cu Chullain may have had a relationship with the Irish Clan, though it is possible his relationship was with the gargoyle beast alone. [4] In the future, he will also have another encounter with Bronx at some point. [5]

Cu Chullain was one of the leading heroes of Irish legend, alongside Finn mac Cool, and a major figure in the Ulster Cycle. He was the son of Lugh, one of the greatest of the Tuatha de Danaan (a race of beings in Irish mythology somewhere between gods and faerie-folk), by Dechtire, the sister of King Conchobar of Ulster. His original name was Setanta, which he held until he slew the great hound of Culainn the Smith at the age of seven. He offered to replace the hound until Culann could obtain a new one, and although his offer was not taken up, he received from that time on the name of "Cu Chullain" or "Hound of Culainn". Contrary to the animated series, there was no separate "Hound of Ulster"; that was a nickname of Cu Chullain's, related to "Hound of Culainn".

Cu Chullain's most famous exploit was defending Ulster single-handedly against the entire army of Queen Maeve of Connacht, when she sought to invade Ulster to capture a magical brown bull. All the other warriors of Ulster were incapacitated by a magical curse at the time, and he held off her entire war-host alone, as recorded in the Irish epic, "The Tain." Maeve, filled with fury at Cu Chullain's having bested her followers, plotted his death. She learned that he had two geasa or magical strictures placed upon him: he must never eat the flesh of a dog, but he must also eat whatever food he was offered. So she had three sorceresses intercept him on the way to meet her in battle at the Plains of Muirthemne, and offer him roast dog for food. Because of his second geas, Cu Chullain was bound to eat the dog-meat, but in so doing, he lost much of his superhuman strength. He was thus overcome at Muirthemne and slain, fighting with his back against a standing stone. When he was mortally wounded, he slew a nearby otter, called by the Irish a river-dog; thus, his last great feat, as well as his first one, was slaying a dog.