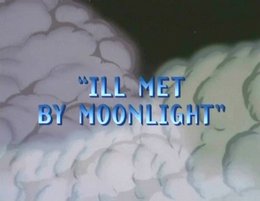 "Ill Met By Moonlight" is the fifty-fifth televised episode of the series Gargoyles, and the forty-second episode of Season 2. It originally aired on February 22, 1996.

The travellers return once again to Avalon, where they have safe haven for a time. The peace is shattered by the dramatic entrance of Oberon, Titania, and the Weird Sisters. Oberon seeks to regain his island for the coming Gathering, and orders the Avalon Clan to leave. When they refuse, he threatens to bury them all alive, but Titania convinces him to give them a fair chance to defend themselves. He orders Goliath, Angela, and Gabriel to challenge him, and then proceeds to chase them around the island. The gargoyles put up a good fight, but Oberon proves too powerful and they are defeated. When the four return to the palace, Tom, Princess Katharine, Elisa, and Ophelia are ready for Oberon with an iron bell, forged during the chase thanks to a clue provided by Titania. Tom strikes the bell until Oberon is on his knees, but can't bring himself to kill him. Impressed with Tom's generosity, Oberon grants the clan permission to stay.

Elisa expresses her desire to return home to Manhattan.

For 1,001 years, Oberon ordered Titania and the Children of Oberon to be sent out into the world to live among mortals, in order for them to learn humility. While Titania and others have learned their lessons, Oberon had not, thinking he had nothing to learn.

Titania offers to be Oberon's queen as an incentive for him to allow the Avalon Clan to defend themselves. Though Oberon loses in the end, Titania still takes him as her husband.

Ophelia wonders whether they have the right to use the bell against the Lord of Avalon.

Oberon grants immunity from his magic to the Avalon and Manhattan Clans and pronounces them his honor guards.

"Not while he's married." - Katharine and Titania

Princess Katharine, Tom and the rest of the Avalon Clan appear for the first time since "Avalon Part Three", although the skiff has returned to Avalon between every foray into the outside world.

Oberon and Titania appear for the first time. Titania alludes to a previous service done her by Goliath, which is an indirect reference to the events of "Walkabout" and a foreshadowing of the revelation in "The Gathering Part One" that Titania and Anastasia Renard are the same person.

The Weird Sisters are still angry at the Avalon Clan following their defeat in "Avalon Part Three".

This episode is filled with Shakespearean references. Not only do Oberon, Titania, and the Weird Sisters all appear on-stage, but Puck is alluded to, and Ophelia's name is revealed for the first time (borrowed, of course, from Hamlet). The episode's title itself is a quote from A Midsummer Night's Dream, Act II, Scene i; appropriately enough, the words are spoken by Oberon to Titania (though for once, Greg Weisman was not fond of this Shakespearean touch, since the title was too often misread as "I'll Meet by Moonlight"). Oberon says as he prepares to head off after the gargoyles, "The game is afoot," which comes from Henry V's "Once more unto the breach" speech in Henry V, Act III, Scene i (though this line is more commonly associated today with Sherlock Holmes, who quotes it at the beginning of The Adventure of the Abbey Grange). And to top it off, Goliath comments at the end, "All's well that ends well, then."

While it had been hinted before in the series that Oberon's Children were vulnerable to iron ("The Mirror", "City of Stone", "Avalon", "Cloud Fathers"), this is the first time that it is explicitly made clear to the audience. This concept is not an invention of the series, however, but an actual folklore motif; in the legends of the British Isles, at least, the faerie-folk could be driven off by iron objects.

From the perspective of "faerie-lore," it was also extremely appropriate to make a bell the iron weapon to use against Oberon, since in traditional legend, the faerie-folk feared the sound of bells and would take flight from them. In the original tales about them, this apparently stemmed from the fact that the bells in question were usually church bells and represented the spread of Christianity, overcoming the pagan beliefs that the faeries were connected to; in Gargoyles, however, the bell's effect upon Oberon stems from the fact that it is made out of iron.

Princess Katharine believes that vampires and weres are similarly vulnerable to silver. This provides us with the only solid piece of information about vampires in the Gargoyles Universe, although vampires and Dracula were referred to elsewhere in the series ("Awakening Part Three", "The Mirror", and "The Hound of Ulster"). However, it is not known as yet whether Katharine's opinion is correct, or if she was merely repeating a common superstition.

Alert viewers will note that King Arthur was already asleep upon Avalon by the time that Oberon banished the Third Race from Avalon in 995, and might wonder why Oberon did not object to his presence the way that he did to the Avalon Clan's. According to Greg Weisman, Oberon agreed to admit Arthur to Avalon because he owed Merlin a favor. (It probably also helped that Arthur would be sleeping in an out-of-the-way place such as the Hollow Hill.)

Terrence Mann's name is misspelled as "Terence Mann" in the credits.

All mention of vampires and weres is cut out, specifically the small scene in the Elisa/Guardian/Princess conversation where it was said "Silver be for Vampires and Weres. For the Children, cold Iron will do."