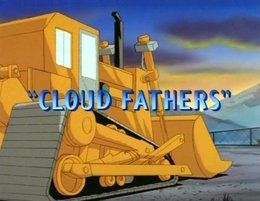 "Cloud Fathers" is the fifty-fourth televised episode of the series Gargoyles, and the forty-first episode of Season 2. It originally aired on February 21, 1996.

Peter Maza comes to Arizona to visit Beth Maza, who is concerned what Xanatos plans to do with the tribal land he's leased nearby. Meanwhile, the travellers arrive in a swimming pool at Beth's school, and meet up with Peter and Beth. Goliath and Angela go to investigate what Xanatos is up to at the Xanatos Construction site, but are captured by him and Coyote 4.0, and are pinned to the ground atop Coyote's sacred carving for Xanatos' plan to use all three as bait so as to lure the trickster to him. Coyote, in the guise of a young Peter Maza, comes to the aid of the Mazas and Bronx in saving the gargoyles, as well as the Coyote carving, from having acid poured onto them. The Coyote robot finally manages to capture the trickster while he was trying to reconnect Peter to his past. Xanatos tries to force Coyote to grant him immortality, when the Mazas and gargoyles arrive. They are nearly beaten until a Kachina dancer performing the Dance of the Coyote appears, causing Coyote 4.0 to release the trickster from within the compartment in his body. With Coyote's help, the group defeats Xanatos, and his robot is once again destroyed. The masked dancer reveals himself to be Peter, who confesses he doesn't know why he put the costume on, but Coyote tells him that the two of them have been connected ever since Peter played the part of Coyote as a Kachina dancer when he was a boy.

Peter Maza abruptly left his father and his home in 1960 to go to New York City.

Throughout the episode, Elisa and Beth ask Peter if he wants to visit their grandfather, for which he answers in the negative. After Peter is reminded of his connection to Coyote and his past heritage, he finally decides to visit his father, who is revealed to be deceased. He admits that he wouldn't go to see him previously because of his own pride and guilt.

Xanatos continues in his quest for immortality. He had the Cauldron of Life melted down to be incorporated into Coyote 4.0, so that the robot could hold the trickster captive.

"After awhile all you notice is the beauty." - Beth and Elisa

The Coyote robot appears again, reconstructed as Coyote 4.0 after Coyote 3.0's destruction in "Grief". The Cauldron of Life, introduced in "The Price" is mentioned as having been used in Coyote 4.0's construction. Coyote 4.0 is destroyed at the end of the episode, but Coyote 5.0 appears in "The Rock", "Rock & Roll", and "Rock of Ages".

Even though the Coyote robots share half of David Xanatos' face, this is the first episode in which Xanatos and Coyote have interacted.

Peter and Beth Maza appear for the first time since "The Cage".

Xanatos' mention of the Cauldron of Life's being made out of iron, and connecting it to Coyote 4.0's ability to imprison Coyote the Trickster, is a foreshadowing of the revelation in "Ill Met By Moonlight" concerning the Third Race's vulnerability to iron, and also indicates (even before it is confirmed in "The Gathering Part One") that Coyote is one of Oberon's Children.