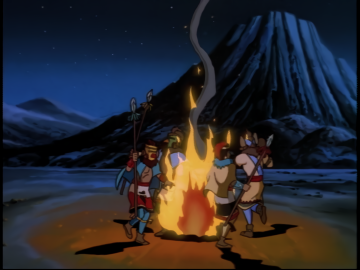 A group of Kachina Dancers.

Kachinas are a group of beings also known as the "Cloud Fathers" who are revered by the Hopi and other Native American tribes in the Southwest of the United States. Coyote the Trickster is one of the most prominent of them. Coyote is one of Oberon's Children, but it is currently unknown whether all or any other Kachinas are as well.

The Hopi perform special dances in their honor, and believe that when they do so, the Kachinas come down to dance with them, as when Coyote himself danced alongside members of the tribal police in 1996. One of the greatest of these dances, though one rarely performed, is the Dance of the Coyote, which Peter Maza performed (at his father's bidding) as a boy, which joined him with Coyote the Trickster.

In the religious beliefs of the Hopi, the Kachina are ancestral spirits, gods, or intermediaries between humans and the gods; there is, in fact, no truly accurate and concise definition for them. On special occasions, the Hopi perform Kachina dances, becoming bonded to the Kachinas by doing so (à la Peter and Coyote in the animated series). These dances are very sacred occasions, and the dancers are not permitted to discuss these matters with others.