Mark of the Panther (episode) 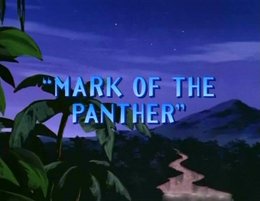 "Mark of the Panther" is the forty-seventh televised episode of the series Gargoyles, and the thirty-fourth episode of Season 2. It originally aired on February 8, 1996.

The travellers meet up with Diane Maza in Nigeria when the werepanther Tea attacks with poachers to get revenge on Fara Maku, who had bestowed the Mark of the Panther onto her. Goliath, Angela, Elisa, Bronx, and Diane track the two transformed humans to Kara Digi and find out that Anansi had marked Fara Maku so that the man could keep Tea at his side. Anansi expresses his desire to enslave the whole group, but Angela thinks of a way to defeat him. Fara realizes that he was selfish, while Tea realizes she was wrong in poaching panthers, so the two of them begin using their curse to protect the jungle.

Diane tells the tale of the Panther Queen, an old African legend, to a group of children.

Goliath finally acknowledges Angela as his daughter thanks to advice from Diane, and Elisa finally opens up to her mother.

"Of course not." - Diane and Goliath

While Anansi appears to have been slain by Goliath, he is seen among the Children of Oberon returning to Avalon in "The Gathering Part One", indicating that he survived. Indeed, there is a hint of his survival at the end, when, after Anansi's disappearance, we see a small spider scurrying along its way; according to Greg Weisman, the spider was Anansi, who had hurriedly shrunk himself to escape the gargoyles.

This episode is the second time that a human has transformed into a panther. In "Metamorphosis", Derek Maza transforms into Talon, and in this episode Fara Maku and Tea are werepanthers of a more magical origin. Derek Maza's sister (Elisa) and mother (Diane Maza) appear in this episode.

Diane Maza is introduced to the gargoyles for the first time. After a conversation with her, Goliath is convinced to accept Angela as his daughter, following the revelation that they were biologically related in "Monsters".

In very early outlines, Fara Maku and Tea Gora were to be were-jaguars instead of were-panthers; fortunately, this was changed ("fortunately", in the sense that it saved the production team from the embarrassment of placing jaguars in Africa rather than South America).

Though Disney's YouTube playlist for Season 2 included this episode, for reasons unspecified, it was set to private.