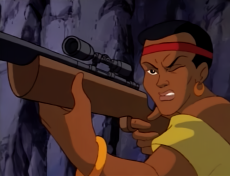 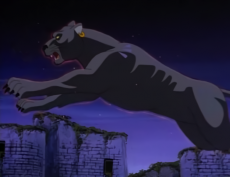 Tea as a panther

Tea Gora is one of the two werepanthers in Nigeria.

Tea was a student of Fara Maku, who decided to leave him and go to live in the city of Abuja. Fara Maku had fallen in love with her, however, and did not wish her to go; he therefore made a pact with Anansi to become a werepanther, and once he became one, placed the Mark of the Panther upon Tea. This turned her into a werepanthers as well. The transformation occurred every time she lost her temper, and this soon made it impossible for her to live in the city. She returned to the jungle to find the panther responsible and kill him. She worked with a band of poachers to slay every panther that she could find, until she discovered that it was Fara Maku who was responsible. Angrily, she hunted him until they came to Kara Digi and learned of Anansi's plans for them. With the help of Goliath and his companions, they defeated the spider, but had to remain as werepanthers. Realizing that she must atone for the panthers that she had helped slay, Tea, like Fara Maku, became a protector-figure for Nigeria. ("Mark of the Panther")

As a werepanther, Tea has a onetime ability to place the Mark of the Panther on one other person, which she has not used yet.

In the future, Tea and Fara Maku will have a child. It is rumored that child will become a werepanther, one way or another. [1]