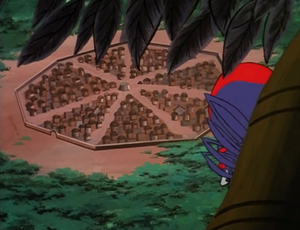 The Ruins of Kara Digi (and Bronx).

Kara Digi is a lost city in Nigeria, built by the Panther Queen and the Houka tribe for Anansi.

The people of Kara Digi hunted and brought food for Anansi. After Anansi quarreled with the Panther Queen, however, he became angry enough to drive all the humans out of Kara Digi - and then realized too late afterwards that he had thus deprived himself of a work force to hunt for him.

Kara Digi lay in ruins thereafter, and faded into legend. Anansi still laired there, however, surrounded by his multitudes of spider-subjects, until Fara Maku sought him out and made the bargain with him that resulted in his becoming a werepanther. Later on, it was the scene of the confrontation between Anansi on the one hand, and Goliath and his companions on the other. ("Mark of the Panther")

Appropriately enough, Kara Digi was built in the shape of a spider's web. The entrances to the city were marked by the Spider Gates.