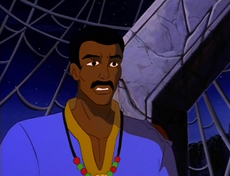 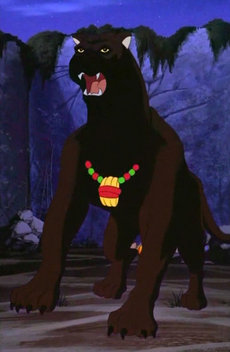 Fara Maku as a panther.

Fara Maku is a friend of Diane Maza, from Nigeria. He is a descendant of Oba and part of the Houka tribe that built Kara Digi. [1]

Fara Maku was a teacher to Tea Gora, and in the process fell in love with her. When she went to live in the city, he did not wish her to go, and so sought Anansi out and made a pact with him, asking the spider to turn him into a werepanthers, so that he could do the same for Tea, and vowing in return to hunt for him. Anansi agreed and Fara Maku placed the Mark of the Panther on Tea in panther-form, thus turning her into a werepanther as well. When she learned what he had done, she hunted him down for revenge, driving him to the city of Kara Digi. There, Fara Maku learned from Diane and Elisa Maza how selfish his behavior had been. After defeating Anansi, he realized that he must atone for his earlier acts. He and Tea, still werepanthers now, serve as protector-figures in Nigeria. ("Mark of the Panther")

In the future, Fara Maku and Tea will have a child. It is rumored that child will become a werepanther, one way or another. [2]