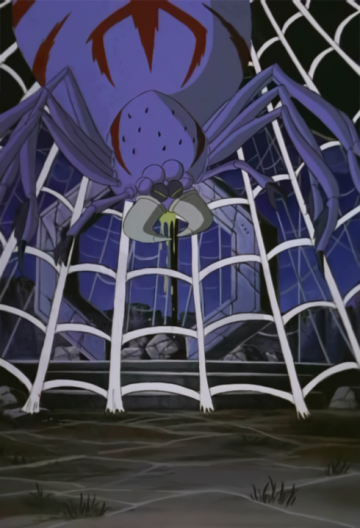 Anansi is a Child of Oberon. A trickster, Anansi is found most often - when off Avalon - in Africa, particularly Nigeria.

At some unspecified point in early African history (perhaps before Oberon's Law was decreed), a female panther made the mistake of mocking Anansi, who retaliated by turning her into a human woman. [1][2] He promised to turn her back only if she built the great city of Kara Digi for him; she agreed, and married the Oba of the Houka to assist her. Their people built Kara Digi and its citizens hunted for Anansi, bringing him food. Anansi grew fat on their offerings to him, and was very pleased; he kept his part of the bargain, and turned the Panther Queen back into a panther. However, she missed her children, and begged Anansi to turn them into panthers as well, so that they could be with her. Anansi would only let her choose one, and she chose her eldest son. Anansi disapproved of her choice, wishing to keep the youth in his service, and tried to turn him against his mother. In the end, however, the youth realized the truth, and agreed to become a panther as well. Anansi reluctantly turned him into one, and then vented his anger upon Kara Digi, driving its people away. Unfortunately for Anansi, his trick backfired; once the people of Kara Digi had left, they could no longer hunt for him, and he went hungry again.

In the 1990s, Fara Maku found Anansi and made a bargain with him; he would become a werepanther and hunt for the spider, so that he could find a way of keeping Tea Gora with him by turning her into a werepanther as well. Anansi agreed, and grew so fat upon the food that Fara Maku brought him that he became unwieldy. When the werepanthers led Goliath and his companions on the Avalon World Tour to Kara Digi, they fought the spider, and finally defeated him. (Anansi’s tremendous bulk became a hindrance to him in the battle, a mark of how once again his trickery had led to his own undoing.) Goliath finally struck Anansi down with a spear. Sensing defeat, Anansi hurriedly disappeared, shrinking down to the size of an ordinary spider and scuttling away to safety. ("Mark of the Panther") [3]

He afterwards returned to Avalon for the Gathering (resuming his colossal size for that occasion). ("The Gathering Part One")

Anansi's interests will one day converge with and compete against those of fellow tricksters Puck, Raven, and Coyote. [4]

Anansi generally looks like a spider, of varying size (what size he is generally depends on how much he's had to eat lately). Anansi can also take on a more humanoid appearance. [5] He is a trickster, and will eagerly bend any bargain that he makes with anyone to his own advantage, at the expense of the bargainer. He likes to eat and has an enormous appetite, but is also very lazy and prefers to let other people obtain his food for him.

Alongside the ability to turn humans into werepanthers, Anansi can command ordinary spiders. The spiders that lived in Kara Digi served him, bringing him messages and even dropping thick webs upon intruders.

Anansi the Spider is a familiar figure in African legend. He is something of a "buffoon-trickster," always coming up with wily schemes to benefit himself at the expense of others, whether by obtaining more food for himself, or by some other way. As in Gargoyles, however, his schemes have a way of backfiring upon him, with comically humiliating results.