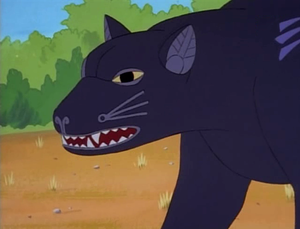 The Panther Queen is the protagonist of a Nigerian legend.

She was a beautiful but vain panther who enjoyed mocking the other animals in the jungle, until she made the mistake of mocking Anansi. He retaliated by turning her into a human, and would only turn her back if she built the great city of Kara Digi for him. She agreed to it, and married the Oba of the Houka tribe, by whom she had many children. She and her husband built Kara Digi, after which Anansi kept his part of the bargain, and turned her back into a panther. 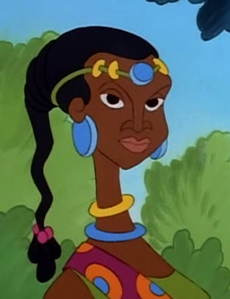 The Panther Queen in human form

However, the Panther Queen now found that she missed her children, and begged Anansi to turn them into panthers as well, so that they could be with her. He initially refused, but at last agreed to let her have one, and only one. She chose her eldest son and placed her mark upon him. This displeased Anansi, who had wished to keep the youth to himself; he lyingly told the Panther Queen's son that she had marked him for some evil purpose, so as to turn him against her. The young man went out to hunt the Panther Queen and slay her, but when he came face to face with her, realized at last the truth about her motives. He willingly agreed to become a panther as well, and Anansi grudgingly changed him into one so that he could roam the jungle with his mother.