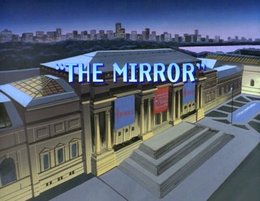 "The Mirror" is the eighteenth televised episode of the series Gargoyles, and the fifth episode of Season 2. It originally aired on September 11, 1995. It was adapted into a Radio Play and performed at the Gathering of the Gargoyles in 2006.

Demona summons Puck from Titania's Mirror and restrains him in order for him to do her bidding. She is easily manipulated by the trickster, however, who minces her words to create havoc in the city by turning first Elisa, then all of the Manhattan humans into gargoyles in response to Demona's wishes to destroy them. Furthermore, Puck turns the Manhattan Clan gargoyles into humans when Demona orders him to turn the Manhattan citizens back to the way they were. The human-turned gargoyles and the gargoyle Elisa defeat Demona at Rockefeller Center, and Puck reverts everything back to normal in exchange for his freedom.

Demona is confronted by Goliath and Elisa at the Metropolitan Museum of Art while attempting to steal Titania's Mirror. She leads them on a chase through the museum and Central Park while a pair of thieves steal the mirror for her.

When Elisa is turned into a gargoyle, she actually thinks the gargoyles have changed and she's always been that way. In an uninhibited moment, her true feelings for Goliath come out when she realizes that she and Goliath are the same species. Goliath takes her gliding to try to convince her that she is human. When the Manhattan populace are transformed into gargoyles, they also don't recognize the change. In a humorous role reversal, the gargoyle-turned humans are afraid of the human-turned gargoyles. A small group runs in fear from the human trio when they make "scary" noises.

Elisa is afraid of gliding on her own, but when Goliath is transformed into a human while in mid-air, she jumps down to save him without a second thought.

Goliath first comes to the realization that he has feelings for Elisa after seeing her as a gargoyle. Though he had feelings for her before, he didn't realize it. Just before the sun rises, Goliath attempts to discuss these new circumstances with Elisa, but she cuts him off before he turns to stone, as she believes they can never be together.

Demona's first request of Puck is to make it so she doesn't turn to stone during the day. Puck distracts her with the image of Goliath and Elisa in the mirror, causing the chaos that follows. After everything is back to normal, Puck offers Demona a boon for all the fun he had, but she brushes him off. Insulted, Puck grants her original wish...by transforming her into a human during the day for the rest of her life. When she realizes what he has done, Demona screams in horror and destroys the mirror.

"Serving humans is fun; they have a sense of humor. You have none!" - Demona and Puck

"Does this look like Aladdin's lamp? I have limits after all." - Demona and Puck

"Then let's do the same to every human in the city!"
"You don't know what you're asking, believe me." - Puck and Demona

"I'll always be there to catch you." - Elisa and Goliath

This is the first time that the Third Race, also known as Oberon's Children, is mentioned in Gargoyles. Greg Weisman is not entirely happy with the name Oberon's Children, as it has been taken too literally by many members of the audience, who interpreted it as meaning that the Third Race are the biological offspring of Oberon. (They are "Oberon's Children" in the sense that the subjects of a ruler might be seen as his children.) [1] He considered many other names for them, all of which were rejected, including Oberati (which was discarded on the grounds that it sounded too much like the name of an Italian car). [2]

Brooklyn and Elisa both allude to A Midsummer Night's Dream, the play by Shakespeare that was the source for Puck (and also Oberon and Titania, who are mentioned in the dialogue but do not appear on-stage until "Ill Met By Moonlight" - unless you count Titania's alias as Anastasia Renard in "Walkabout").

The first hint about Puck's alter ego as Owen (a notion that occurred to Greg Weisman and a few other members of the production team independently and simultaneously) appears when Demona says to him, "You serve the human; now you can serve me." The "human" in question, of course, is Xanatos, though Puck immediately says "Serving humans is fun", shifting the word to plural in order to prevent the audience from becoming suspicious too early.

Demona refers to Hudson as "Old Soldier", as she did in "Long Way To Morning".

At the end of the episode, Puck casts a spell on Demona so that she will become human during the day, instead of turning to stone. This spell remains in effect for the rest of the series.

The production team briefly considered calling Puck by his Shakespearean alias of "Robin Goodfellow" instead, out of fears that the name "Puck" might be misheard as a certain four-letter-word that rhymed with it. In the end, however, they decided to simply be very careful about how they pronounced it. [3]

At the beginning of the episode, when Elisa in her museum guard disguise responds to the sound of Demona's break-in, her reflection in Titania's Mirror does not copy her movements. This was deliberate on the production team's part, to hint at the mirror's magical nature. This pose was later mirrored by Demona in "High Noon" after turning human in front of Elisa.

Puck's line to Demona, "What does this look like to you, Aladdin's lamp?" was an in-joke reference to the then-running Disney animated series Aladdin, based on the movie.

The gargoyles' human forms were modelled partly on their voice actors, with appropriate changes made for their most distinguishing characteristics that would cross over during the transformation (such as Hudson's beard). Goliath's human-form's skin tone is darker than that of the other human-form gargoyles, again to match his voice actor Keith David. Greg Weisman has commented that the in-universe explanation for his darker skin tone is actually to match that of Elisa. [4]