Demona's henchmen are various crooks and thieves that Demona has hired to aid in her schemes. 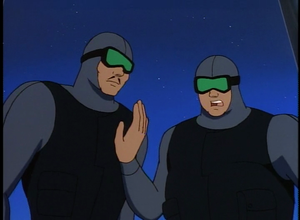 The thieves that stole Titania's Mirror

While Demona distracted Goliath and Elisa, two thieves she hired broke into the Metropolitan Museum of Art and stole Titania's Mirror. They later delivered it to her townhouse, using the password "Oberon sent me", where they left it on the front porch after receiving payment through the gargoyle-shaped door knocker.

Demona's working relationship with the thieves is mostly unknown. However, she had hired the heavyset thief before and apparently was satisfied enough with the work he did to hire him again. She apparently trusted the thieves' discretion to have them deliver the mirror to her home. The heavyset thief was likewise impressed with the amount of research she put into planning the theft. Despite their competence, the thieves did receive a threat from Demona to leave quickly after delivering the mirror.

The other thief was thin and had a mustache. The decor of Demona's townhouse made him wonder if Dracula's daughter lived there.

Both thieves wore dark clothing with hoods and goggles.

The thieves that attempted to steal the D/I-7

The one that got away.

Demona hired four thieves to steal canisters of D/I-7 from Xanatos Enterprises, for what was later revealed to be for Operation Clean Slate. The daylight theft was interrupted by Elisa Maza and her new partner Jason Conover (an alias of Jason Canmore). A shootout ensued and a high speed chase that nearly ran over the Jogger and Art. The chase ended in Central Park where Jason managed to shoot out the thieves' van's back tire, making it crash. One of the thieves was thrown clear and escaped, while the other three were taken into custody.

The thief who escaped reported back to Dominique Destine, Demona's human alias, interrupting the job interview she was conducting with Robyn Correy (Robyn Canmore). Dominique berated him for interrupting, concluded the job interview and pulled him into a private room for his report. When the theft informed her that they had failed due to police interference, Dominique was outraged, but she did not harm the thief and let him leave seconds before she transformed into Demona.

Demona's working relationship with this group of thieves is also mostly unknown. Unlike the previous thieves, this group had apparently met her face to face. Since she let the uncaptured thief leave before her transformation, it's unlikely that they knew she was a gargoyle. Still, the uncaptured thief was very fearful of her and backed away when it appeared she was going to attack him as Dominique. What happened to the arrested thieves is unknown, but they must have remained silent about their connection to Dominique or Nightstone Unlimited since Matt Bluestone did not have any leads later and was only seen interviewing Xanatos.

This group of thieves all wore black clothing with dark blue jackets and wore black ski masks. All of them seemed of average build. The uncaptured thief had light brown hair and was the only one seen unmasked.

Greg Weisman wondered in his ramble for "Hunter's Moon Part One" if the thief who reported back to Demona was one of the thieves from "The Mirror". [1]

It is possible. The thieves who stole the mirror for her did their job competently and as stated above, one of them had worked for her before that theft. The distinguishing features of those two thieves were that one was heavyset and the other was a little taller with a mustache. However, the theft of Titania's Mirror occurred September 27, 1995 and the theft of the D/I-7 occurred October 24th, 1996. With more than a year between thefts, the heavyset could have lost weight and the thin thief could have shaved off his mustache, probably for greater anonymity.