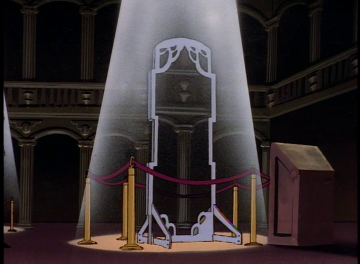 Titania's Mirror is a magical mirror crafted by Oberon's Children for Titania, and twin to Oberon's Mirror.

For some as yet unknown reason, it was removed from Avalon, and eventually found its way to New York City, where it was put on display at the Metropolitan Museum of Art as part of the "Titania's Treasures" exhibit in 1995. Demona stole it, and used it to summon Puck in the hopes of forcing him to destroy all the humans in Manhattan, although she was disappointed with the results. After Puck gave Demona the gift of remaining awake in the daytime and she discovered that what that entailed was turning into a human each day, she angrily shattered the mirror. ("The Mirror")

The leading known power of Titania's Mirror was to be used as a tool in summoning Puck (although he wouldn't have been the only individual capable of traveling through it). [2] It could also serve as a sort of conduit for his spells, and even as a magical viewing device.