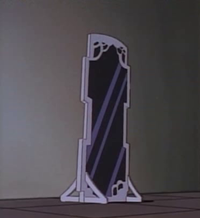 Oberon's Mirror is a magical mirror, twin to Titania's Mirror.

Oberon currently keeps the magical mirror in his throne room in his palace on Avalon. The Mirror's powers have allowed him to communicate with Princess Katharine in another part of the palace, summon Boudicca from her chamber to his throne room, and travel through it with the gargoyle beast to the outside world. ("The Gathering Part One")

It can probably also be used to summon Puck, like Titania's Mirror, although Oberon chose not to use its powers for that purpose at the time of the Gathering, preferring to drag Puck back to Avalon himself. [2][3]