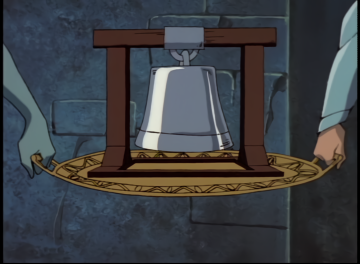 The iron bell was a weapon constructed by the Avalon Clan to defeat Oberon.

When Oberon let Titania reduce his power to the level of one of Oberon's Children to battle the Avalon Clan's champions (Goliath, Gabriel, and Angela), Titania told Oberon that if they sounded the knell of his defeat, another ring would be his reward. Elisa, Guardian, and Princess Katharine picked up on Titania's hidden meaning and decided to construct a bell.

Melting down Elisa's gun and the chains the Magus used to bind the Weird Sisters, Guardian was able to forge a bell. Michael and Raphael may have helped him. [1]

Although Ophelia questioned their right to use it, they did use the bell against Oberon and greatly weakened him, with each successive ring preventing him a chance to recover. [2] They showed him mercy, however, and did not kill him. Impressed with them, Oberon allowed them to stay and Princess Katharine promised never to use the bell against him or any of Oberon’s Children. ("Ill Met By Moonlight")

Greg Weisman wrote in 2000 that he "wouldn't be surprised" if Oberon now had a contingency plan to countering another attack from an iron bell. [3]