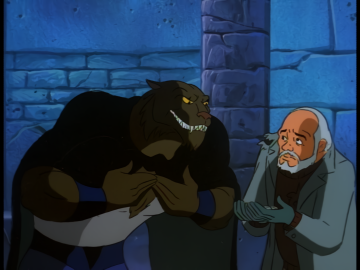 Al being harassed by Fang

Al is an old man, who became a resident of the Labyrinth.

Al's background is not known, but at some point in his life he became homeless and eventually came to live in the protected confines of the Labyrinth. After coming there Fang and his human supporters, Chaz and Lou, tried to rob him and extort him, but Talon prevented them. ("Kingdom")

Later, Al would rise to a position of some significance in the Labyrinth. He became something of a major-domo to Talon, whom he calls Boss-Cat. ("Invitation Only")