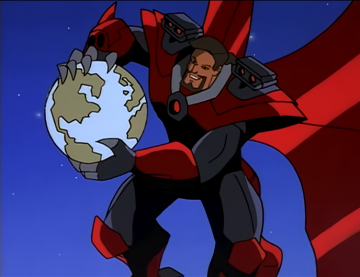 Not to be confused with the Xanatos Computer Program from "Legion".

The Xanatos Program was a computer program designed to simulate David Xanatos in Puck's illusion.

According to the program, it came into existence as a sort of contingency plan of Xanatos's; after he and Hudson slew each other in 2004, his memories and brain patterns were transferred intact into computer form, giving him his cherished dream of immortality at last. However, Lexington in that vision indicated that he created the Xanatos Program as a means of subtly taking over New York City following Xanatos's death, using it as a sort of "front man" to hide behind so that his treachery would not be discovered.

Whatever its origins, the Xanatos Program indeed simulated Xanatos in both appearance and character, but even colder and more ruthless. By 2036, Lexington had already used the Xanatos Program to seize control of Manhattan, and by the end of Puck's vision, was even spreading it all across the world via the Internet, to seize control of every computer on the planet and thus the planet itself.