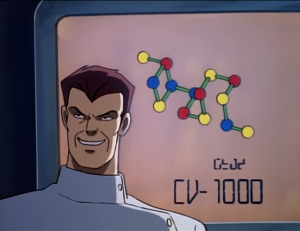 The CV-1000 Carrier Virus is a genetically engineered virus created by Sevarius for Demona at Nightstone Unlimited, as part of her Operation Clean Slate program. The virus was itself nothing more than a means of carrying an antigen or pathogen, capable of spreading through air, water, and mammalian vectors; if released, it could cover the entire planet quickly. Demona in her "Dominique Destine" persona claimed that its purpose was to be bonded with antigens to create a cure as contagious as any disease, but her real purpose for it was as a means of destroying humanity, by magically bonding it with the D/I-7 Detergent using the Fulfillment Spell, creating a plague powerful enough to destroy the entire human race. ("Hunter's Moon Part Two", "Hunter's Moon Part Three")

Because of the terms of the Fullfillment Spell, the virus was only dangerous during the night of the Hunter's Moon while it was at Saint Damien's Cathedral. It was eventually (and easily) destroyed by the Manhattan Clan. [1][2]