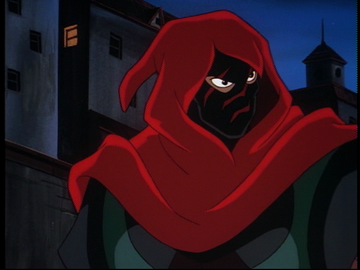 Stuart Canmore (currently referred to as the Renaissance Hunter) was a Hunter from the Canmore family. [1] He pursued Demona during the late 15th century. He attacked her in Florence in 1495, on the same night that she stole the Medici Tablet, mounted on a hang-glider that looked like something out of one of Leonardo da Vinci’s notebooks, but failed to slay her. ("Hunter's Moon Part Two")

Stuart Canmore's first name is most likely a reference to the Stuart family, who became the kings of Scotland in 1371 with Robert II (1371-90). In 1603, James VI of Scotland (1567-1625) became King of England as James I (1603-25), and thereafter, the Stuarts were both Kings of Scotland and England until 1714 (except for the hiatus between 1649 and 1660, when England was a republic). James VI/I saw himself as descended both from Duncan and Canmore, and also the legendary Banquo and Fleance (which likely influenced Shakespeare's treatment of Macbeth's story).