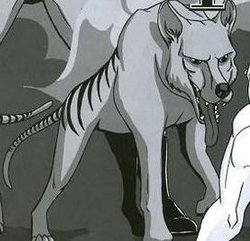 One of Tazmanian Tiger's thylacines

Thylacines are carnivorous marsupials native to Australia, and more commonly known as Tasmanian tigers or Tasmanian wolves. They are generally believed to have been driven extinct in the 20th century.

Tazmanian Tiger is named after this animal and somehow acquired two such beasts, named Benjamin and Natasha, which he used to help him commit a crime in Sydney. ("Strangers")

These two thylacines were apparently the product of Sevarius's genetic engineering, though we have no further details at present. ("Estranged")

The thylacine species, scientifically named Thylacinus cynocephalus, was the largest carnivorous marsupial existing in historical times. In general shape and appearance, thylacines closely resembled placental wolves, even though they were marsupials and thus unrelated to the dog family. They had light brown to grey fur with distinctive black stripes on the rump, hind legs, and tail, leading to the common name of Tasmanian tiger. Unlike wolves and tigers, thylacines had fairly inflexible tails. Like all marsupials, the females carried their young cubs in a pouch.

Thylacines were nocturnal carnivores, roughly the same length from nose to tail-tip as a wolf, though with a proportionately longer tail and shorter legs, and weighing about half as much as a wolf. In close quarters, they were stronger than hunting dogs of similar size, and had the unusual ability to bite through bone. Thylacines could also open their jaws extremely wide, and this gape may have served as a threat display. They reportedly made a sound like a cough or bark.

Despite their overall resemblance to wolves, most evidence indicates that thylacines did not behave like canids. They had shorter legs than wolves, and the proportions of their limbs indicate that they could not have effectively hunted prey by means of a long chase. They were known to be slower runners than dogs, though they had greater agility when leaping, and this may indicate that they hunted by ambush. There is no evidence that they hunted in packs. 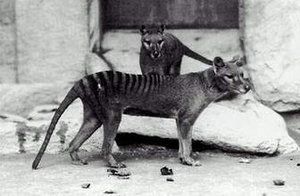 Thylacines were originally the top predator in Australia and New Guinea after the end of the ice age, but scientists are not sure when the species disappeared from these areas. By the time European explorers arrived on the continent, thylacines were restricted to the island of Tasmania.

Europeans quickly came to consider the "tigers" a threat to their livestock. Settlers waged a determined campaign of extermination against the thylacines, including bounties offered, similar to the overhunting which has extirpated the true wolf from most of Europe and North America. The combination of bounty hunting, deforestation, and possibly competition and diseases from introduced dogs, caused the rapid disappearance of the species. The last known individual, named Benjamin, died in the Hobart Zoo in 1936, the same year that the Australian government finally gave the thylacines legal protection.

Although thylacines are officially considered extinct by the international scientific community and the Australian government, unconfirmed sightings of the animals have never ceased in the areas near remaining forests, and a possibility remains that the species still exists. However, if thylacines are still extant, continuing deforestation and mining in Tasmania may soon finish them off.