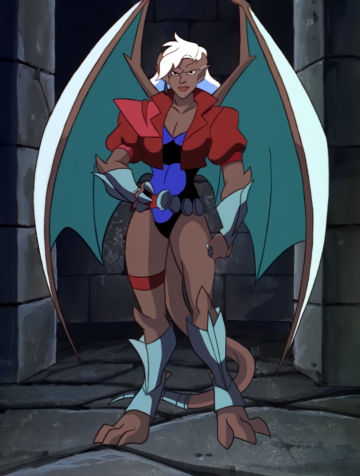 Delilah is a clone made from a combination of Demona and Elisa Maza's DNA via the robotic mosquito by Sevarius for Thailog.

Unlike the other Clones, Delilah was made without Demona's knowledge; Thailog had already decided that Demona was too violent and unpredictable to make a viable mate for long, and therefore wanted a new mate as a successor to her when the time came to break with her. He therefore had Sevarius create Delilah for this purpose. (His choice of originals for his new mate suggests that Thailog has something of an Oedipus complex.)

After Demona protested Thailog's decision to kill the captive Angela at Coney Island, he decided that the time had come to reveal Delilah to her. This revelation proved to be the straw that broke the camel's back, as Demona released the Manhattan Clan and then sought out vengeance upon Thailog for piling insult upon betrayal by mixing her genes with Elisa's. In the battle that followed, Angela defeated Delilah, who afterwards went to live in the Labyrinth with the other Clones. ("The Reckoning")

After being rejected by Angela, Brooklyn began making a move to ask Delilah out, only to have Goliath ask the clone to accompany him to a Halloween party instead. ("Invitation Only") Her appearance at the party led Thailog to lead an attack on Castle Wyvern with the Clones in order to "reclaim" her, as well as to extract DNA samples from the members of the Manhattan Clan. At the end of the battle, Delilah was presented with the choice of allying with Thailog or not; she chose to return to the Labyrinth with the other Clones except Brentwood. Brooklyn later observed Delilah and Malibu holding each other affectionately, which may be taken to suggest an emerging, romantic link between the two. ("Bash")

Delilah will eventually become the ancestor of Delilah. [1] 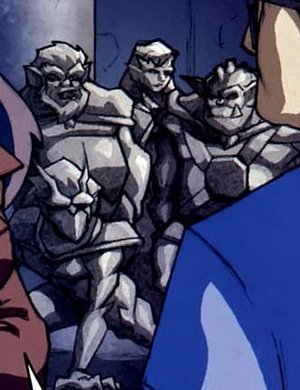 Delilah, with Burbank, Malibu and Hollywood, as stone during the day. ("The Rock")

Delilah is mostly a clone of Demona, with 90% gargoyle DNA and only a little of Elisa's human DNA thrown in for "cosmetic" differences. [2][3] As such, she will reproduce in the gargoyle fashion, by laying eggs. [4] Like all gargoyles, she turns to stone during the day. Her facial features and coloring are similar to Elisa's, while her brow horns, wings and knee and elbow spikes are very reminiscent of Demona's own. She wears a purple leotard, a modified jacket similar to Elisa's, and she has several metal armor coverings on her body, including her lower legs and arms, the end of her tail, and on each talon of her hands.

Unlike other female gargoyles, Delilah's eyes glow white, instead of red.

Delilah's programming obviously went beyond that of the male clones. She's intuitive and articulate, and capable of making well thought-out decisions. She seems to be the natural leader of the clones.

July 15. Demona is imprisoned in the Labyrinth next to a cell by Fang. Elisa is bitten by a robotic mosquito that samples her DNA. ("The Reckoning")

October 13. The gargoyles are defeated at Coney Island by Thailog and their clones and held prisoner. When Demona doesn't allow Thailog to kill Angela, he reveals the clone hybrid he made in secret, Delilah, from the combined DNA of Demona and Elisa. Enraged, Demona releases the clan and Talon and a battle breaks out. The clones and Fang are beaten, and when it appears that Thailog has been killed in a fire, Talon offers to let the clones join his clan in the labyrinth, creating the Labyrinth Clan. ("The Reckoning")

October 31. At Elisa's insistence, Goliath goes to the labyrinth to ask Delilah on a date to Xanatos' Halloween Masque. They leave before Thailog attacks the Labyrinth and reclaims the male clones. They arrive at the Eyrie Building during the party and corner Goliath. While waiting for Delilah to arrive, Thailog stabs Goliath in the abdomen with a dagger. ("Invitation Only", "Masque")

Delilah was named after the infamous woman who betrayed Samson to the Philistines (Judges 16: 4-20), and who has since become a byword for female treachery and seductiveness; doubtless, this was in Thailog's mind when he chose her name, particularly the seductiveness. The name also has some similarities to both "Demona" and "Elisa".