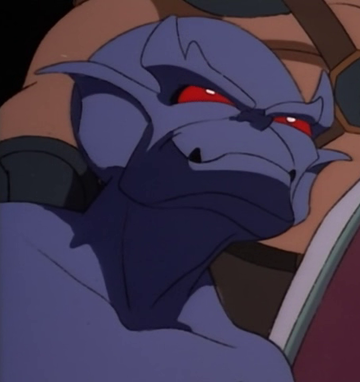 Brentwood is a clone of Lexington.

The plan to create Brentwood and the other Clones was orchestrated by Thailog. Demona supported the idea and together they used Doctor Sevarius's skills and the resources of Nightstone Unlimited to implement the plan.

On July 16th, 1996 while Lexington was guarding Demona in her cell in the Labyrinth, Demona released a robotic mosquito that obtained DNA samples from Lexington and then flew back to Nightstone Unlimited Headquarters. There, Sevarius retrieved the sample and used it to begin the process of creating Brentwood. The cloning process was very similar to Thailog's creation. Sevarius accelerated Brentwood's aging until he was at the equivalent maturity of a twenty-something human (or a forty-something gargoyle) and Thailog conducted a subliminal education program instructing Brentwood with only very basic speech abilities and one overriding command: "Obey Thailog". [1] By October, Brentwood was released from his cloning tube and soon after was revealed to the Manhattan Clan at Coney Island. With the other Clones he fought against the Clan but was ultimately defeated. With Thailog presumed dead, Brentwood and the other Clones seemed lost, but fortunately Talon, who was also present for the battle, offered to take them back to the Labyrinth and have them join his "clan". More than that, he offered to teach them verbs and to think for themselves. The Clones then began to live at the Labyrinth. ("The Reckoning") 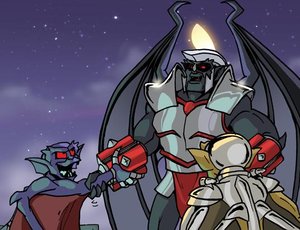 Less than a month later, on Halloween 1996, Thailog arrived at the Labyrinth to "reclaim [his] property". Though Talon and Maggie had made some efforts to teach the Clones to have free will, they quickly adjusted to the notion that Thailog was alive and, without signs of reservation, followed his orders and left the Labyrinth with him. ("Masque") From there, Brentwood and the others accompanied Thailog to the Eyrie Building where a battle with the Manhattan Clan soon erupted. However, Brentwood did not fight. Though he had followed Thailog's orders to restrain Claw at the Labyrinth, against the Manhattan Clan he did not protect Thailog when he ordered it. Instead he remained off to the side, watching the battle and seemingly contemplating free will and choice. When the battle ended and a choice was offered to the Clones, they all decided to return to the Labyrinth... except Brentwood. In a move that surprised even Thailog, Brentwood decided to stay with his former master. He felt Thailog's intelligence and leadership was more to his liking than the freedom he experienced in the Labyrinth. Much to Lexington's chagrin, Brentwood left the Eyrie with Thailog. ("Bash")

Brentwood greatly resembles Lexington but has a row of spikes on his back and upper tail, and small horns on his brow ridges. He also has a small spike on the shoulder joint of each wing. Thanks to the artificial aging, Brentwood has dark purple skin, red wings, red eyes, black teeth, and a white mouth. [2] He wears metal greaves, metal tips on his claws, and a metal spike on his tail.

July 16. Lexington is bitten by a robotic mosquito that samples his DNA. The mosquito returns to Sevarius at Nightstone Unlimited, reavealing Thailog's plan to create the Clones. ("The Reckoning")

Brentwood was named by Demona after a suburb of Los Angeles to contrast with Lexington's name and, in Demona's opinion, the ridiculousness of it. [3]

Greg Weisman suggested that one only has to look at "Future Tense" to see the direction that Brentwood is heading.

In the German dub, Brentwood is named Pasadena.