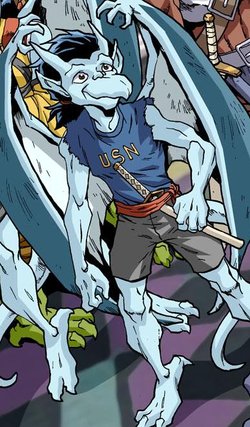 Nashville (or Gnash for short) is a male gargoyle of the Manhattan Clan.

Brooklyn and Katana produced the egg containing Nashville during their TimeDancer adventures and he hatched eighteen years before they finally return home to Manhattan in early 1997. This makes him the equivalent of a nine year old human when he joins the Manhattan Clan. The year he actually hatched in was 1978. That being the case, when he arrived in Manhattan in 1997 he was the same age as any other gargoyles that hatched in 1978 despite his time traveling adventures between the time of his hatching and his arrival in New York. [1]

Nashville has spent his early life traveling through time and space with Brooklyn, Katana and Fu-Dog. Because he was not a part of any one clan during his early childhood, Nashville is aware of his biological parentage. Like his father, Nashville is named after a place, though the exact reasoning for his name is unknown.

Nashville joined the Manhattan Clan in 1997 as the youngest gargoyle member (if you don't count the as-yet-unhatched Egwardo). ("Phoenix")

Nashville strongly resembles his biological father, Brooklyn, but with Katana's blue coloring and black hair. He wears a torn t-shirt with USN written on it (which stands for United States Navy), a pair of shorts, and carries a kodachi on his belt. [2]

He also greatly prefers being called Gnash over his full name.

He has a knowledge of British slang.

While Nashville played with Angela, Brooklyn announced to Broadway and Lexington that he and Katana had decided that they wanted the whole clan to be Nashville and Egwardo's rookery parents. [6]