Fu-Dog is a gargoyle beast, originally part of the Xanadu Clan in China at some unspecified point in time, and now a member of the Manhattan Clan. [1]

Fu-Dog hatched at an unspecified point in time. When Brooklyn visited Xanadu during his TimeDancer adventures, Fu-Dog joined him as his first companion. [2] Fu-Dog is fiercely loyal to Brooklyn. The two of them visited 2198 together, and jointly battled the Space-Spawn as part of Samson's resistance movement. [3] Later they visited feudal Japan and many other locales and times. [4]

Eventually, in 1997, Fu-Dog returned with Brooklyn, Katana and Nashville (and an unhatched egg) to Manhattan and from that point on was a member of the Manhattan Clan. ("Phoenix") 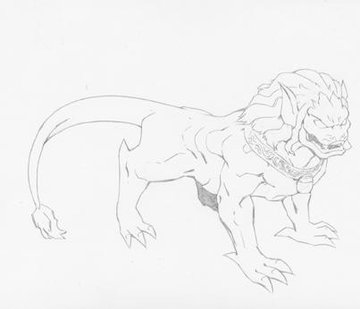 Fu-Dog has green skin with a brown lion-like mane and a long tufted tail. He wears a gold collar on his neck. As of his joining on the Manhattan Clan in 1997, he is at least 20 years old biologically.

Fu-dogs, in the real world, are statues of strange beasts found in East Asia, especially China, and also known as fu-lions, shishi, and shisa. They are believed to be protector-figures, and therefore function quite effectively as a Chinese equivalent to gargoyles. Fu-dog's name obviously reflects this, suggesting that in the Gargoyles Universe, fu-dogs were inspired by local gargoyle beasts in the same way that the architectural gargoyles on the castles and cathedrals of medieval Europe were inspired by gargoyles living in those regions. In the real world, fu-dogs originated in China, and are believed to be a combination of travellers' descriptions of lions (which are not native to China) and common dog breeds. They may also have been inspired, in part, by similar statues built in India. They are placed in pairs outside the doorways of buildings, which they are believed to guard from danger. Traditionally, one of a pair of statues is female, indicated by a cub under its paw, while the other of the pair is male, identified by a ball under its paw.

Fu-lions are only the most numerous and well-known of the East Asian guardian beasts. Other types of statues included the Korean haetae, the winged bixie or pi-xiu, and statues of qi-lin.