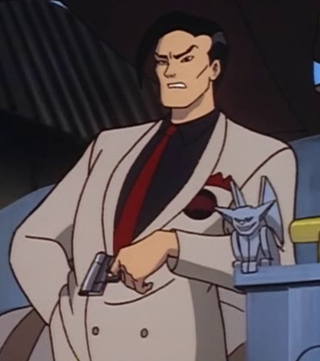 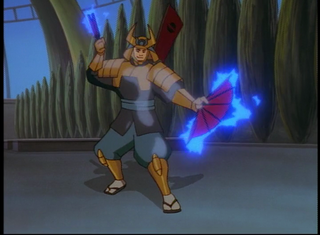 Taro in his armor with his electrified fans.

Taro is a Japanese businessman from Ishimura.

As a boy, before going away to a major city in Japan (whose identity is currently unknown), he learned Bushido from the gargoyles of Ishimura, but was a poor student. Exactly how poor became clear after he grew up, made a fortune, and returned to the village. Taro decided to capture the Ishimura gargoyles, and display them at a nearby "Gargoyle Theme Park" that he had built as curiosities, hoping to make a considerable amount of money this way.

To assist him in this coup, he formed an alliance with Yama, who was feeling dissatisfied with life in Ishimura and believed that gargoyles should reveal themselves to the outside world. Taro tricked Yama into believing that the purpose of the "Gargoyle Theme Park" was to allow the Ishimura clan to do just that, falsely claiming that the first visitors to it would be a group of schoolchildren whom the gargoyles would teach bushido to. Yama thus helped Taro build the theme park and kidnap the Ishimura clan in the daytime (Taro used a band of ninjas to temporarily incapacitate the human villagers, and Elisa, who was visiting with her companions on the Avalon World Tour). He then sent for a group of reporters to visit the theme park in the morning and witness the gargoyles turning to stone.

But Elisa and Hiroshi came to the theme park to rescue the gargoyles, and Yama discovered Taro's true intentions and helped defeat him. The gargoyles were freed, and Taro ended up dangling from a gigantic animatronic gargoyle in the theme park in front of the reporters, looking like a fool. ("Bushido")

Taro was presumably not quite finished with the gargoyles, however, for later on, upon seeing an interview with on Nightwatch where Vinnie mentioned having gotten his revenge on Goliath, Taro promptly gave Vinnie a security job for him. We as yet can only wonder what his response will be when he discovers that Vinnie's revenge consisted of hitting Goliath in the face with a banana cream pie. [1]